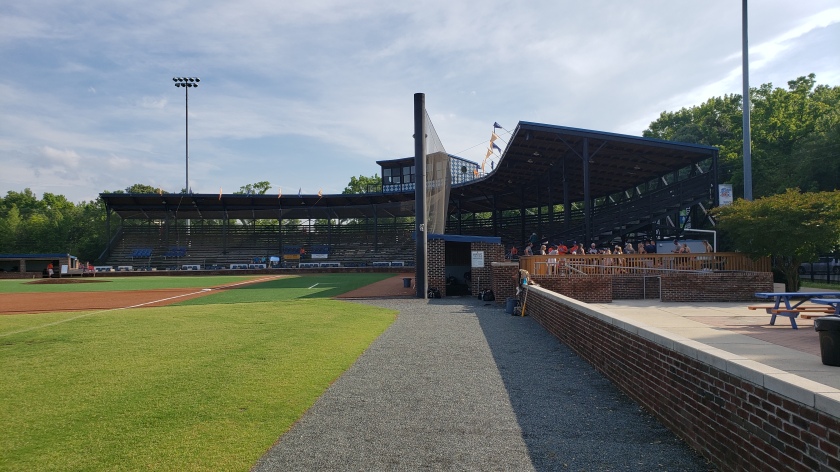 Getting back on the road was met with a ton of excitement, but also anxiety that was related to if the weather would get in the way of the game. Before getting to that moment however, I cranked up “Something To Wrestle with Bruce Prichard” and enjoyed the ride down to the Hampton Roads. While I’ve been to the area a few times, I’ve never been to Hampton on the Peninsula and I had extra time before the game to check out the History Museum and the nice little section on Queens Way where I ate at Brown Chicken Brown Cow. The game was a few miles from downtown as War Memorial Stadium sits in the Wythe neighborhood, a setting typical for ballparks built 70+ years ago. Looking at radar, I was happy that gates opened an hour and a half before first pitch as it gave me time to get all my pictures in and enjoy a little pre-game live music before a nasty storm arrived. It couldn’t have come at a worse time (6:25 PM) and with some training on the south end of the line, it rained heavily until about 7:30 PM. At least as a weather nerd, I enjoyed a shelf cloud, rainbow and mammatus. I also heard every song imaginable that involved Rain and Sun. Being my first game back in well over a year, I was really worried the game would get cancelled because of an unplayable field. The outfield was in fact water-logged after over an inch of rain, but the amount of actual puddles was quite low thanks to a relatively new drainage system. It was an agonizing wait for fans as players milled around with minimal definitive action. That lasted a good 45 minutes until we finally saw the umpire and a decision was made…..Play Ball! First Pitch between the Peninsula Pilots and Wilson Tobs would be at 9 PM.

So, of course, the first two innings take over an hour with plenty of runs, hits and errors. The whole night was strange and what summed it up was a 10-minute delay as umpires studied a bat from one of the Peninsula players. Was there pine tar? Would a college kid have the ingenuity to cork it? It would remain mysterious to those in the ballpark, but nevertheless, the umpires called him out and took back two runs (I found later from the team recap that it was an unsanctioned bat). Another oddity on the night: There was no one at the main gate checking tickets, you could literally just walk right in (this was pre-game before the storm). As the game marched on, I could have questioned my sanity. It was 11:15 PM in the 6th inning and I drove 7 hours to watch a random baseball game. And then I realized, yes, this is awesome and this is exactly where I’m happy to be. The Pilots beat Wilson 7-4 as the game ended after Midnight and I loved nothing more to sit in that old wooden grandstand, back at a sporting event. I also was impressed with the fans as a good chunk of them stuck around for the majority of the game.

The next day, I drove an hour west to Richmond and there was plenty of time to check out some sights before the evening soccer match. This was my third visit to the city and I started by the riverfront on the very cool Potterfield Bridge, which includes a pedestrian bridge across the wide James River, providing plenty of great views. The American Civil War Museum is right there and I made a visit before eating at one of Richmond’s many great restaurants. My choice was Perly’s and I had the awesome Jewish Egg Roll along with a refreshing salad (it was a hot day). For a little peace and quiet away from the city, I stopped at Agecroft, a historic house and gardens. After a walk around the trendy Carytown neighborhood, it was off to nearby City Stadium.

Home to the Kickers since 1995, this old place rocks every match thanks to the River City Red Army. While it’s a small group, they do bring the noise and the drums/voices make for a great USL atmosphere. I also thought it was a decent crowd on this night (the first allowed back at 100% capacity) with nearly 3,000 on hand. I was a little disappointed that they knew so little about the team and game. They popped for the big stuff, but barely acknowledged players during pre-game introductions and failed to reward a couple of hustle plays with any applause. For a club with this long history and a city with these demographics, I expected more and I have to learn to lower my expectations that most of the country still hasn’t fallen in love with the beautiful game. Regardless, it was a fun night and the Kickers won 3-2 in a great one that featured open play and plenty of chances. In a stadium not designed well for soccer (or any sport for that matter), the team has done great things as they’ve added food trucks, some end suites and a lot of red paint. They’ve also given back a lot to the community and this game was Pride Night with proceeds from various items given to a local organization that works in the LGBTQ+ community. Richmond is certainly a great club to support and more in the region hopefully will continue to become fans and show support.

It was a fantastic weekend and I cherish the opportunity to visit many places and be a part of their stadium experience for one night. Look for detailed reviews on each visit to be completed in the next week or two.