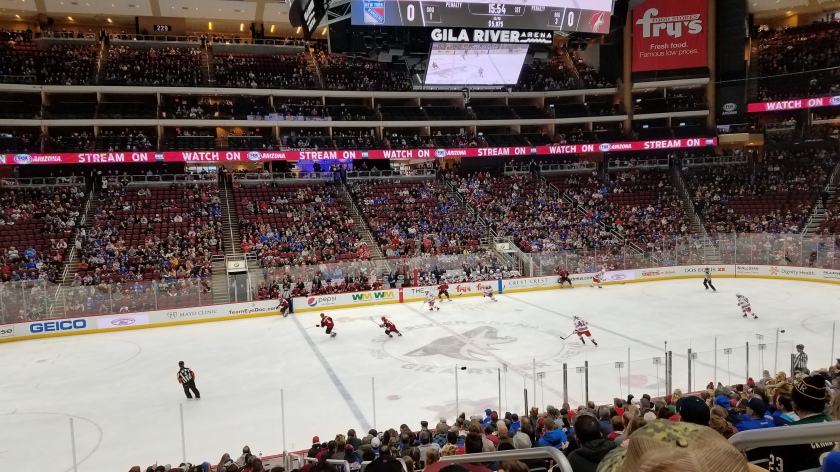 Our work conference in Phoenix allowed for free time during the day and while the weather wasn’t as warm as we hoped, it was still decent enough for golf on Saturday at Coldwater Golf Club, about 20 minutes west of downtown. Sunday was new stadium day as a matinee provided the chance to see the Coyotes in Gila River Arena. The team’s supposed struggles in being “financially viable” have been well documented elsewhere, so I won’t rehash that and we’ll stick with an arena review, which began great. We took an Uber out to Glendale early so that we could hang out in the terrific Westgate Entertainment District right across from the arena. This mixed-use section contained an excellent assortment of bars and restaurants that were perfect for a pre-game hangout (Yard House was our choice and look at all the beers on tap). The area looks nice too with dancing fountains to introduce visitors.

Inside the arena, the concourse is adequate enough though it could use a little more space and certainly some more decoration with Coyote displays. What it does have going for it is special amenities including a Mother’s Nursing Room and the arena is certified as sensory inclusive. The rink itself is on the smaller side, which can typically create more intimacy and that happens here with more than half of the seats coming in the lower bowl. However, it is worth noting that those seats were surprisingly on the narrow side and they didn’t have enough of a pitch as they should have as I had a few heads in my way that obstructed the view. See the video for game play to see what I mean. The rows in the upper-deck are quite steep, the problem there is the double-decker (and tall) set-up of luxury suites forces the 200 level to be quite high.

The game was a ridiculous blowout as Arizona thoroughly dominated the Rangers. After two periods, it was 5-0 and the Coyotes had more than double the Shots on Goal. This was much to the chagrin of the many Rangers fans in attendance that probably made up about half of the less than 10,000 or so on hand. I feel bad for Coyote fans that constantly have to put up with road teams bringing in large numbers of people in visiting gear. Those that were for Arizona created an ok atmosphere (though that’s hard given the relatively low attendance). They stood for all goals and at times tried to out yell the “Let’s Go Rangers” chants with “Let’s Go Cay-Yotes”. Expect to hear a lot of howl’s over the sound system as that injects some character. Overall, this was an enjoyable arena visit and one that I recommend given the fun hang out spots in the District before or after the game. I’ll have a detailed review up by the end of the weekend.