.
Last weekend, we spent some time in Newport, Rhode Island. The occasion was our 10-year wedding anniversary, so sports was not necessarily on the agenda. Despite that not being the main travel objective, there still were some takeaways on the stadium scene in Newport. First, a little about the town: It is a ritzy place on the rocky shores of coastal Rhode Island and the city’s location on both the Ocean and Narragansett Bay have a significant influence. Lots of history in this longtime summer oasis and it does indeed make for a great place to get away for the weekend. Just make sure you’re willing to shell out a lot of dough as everything is quite expensive. My favorite attraction was the 3.5 mile Cliff Walk. The winding trail of both smooth pavement and uneven rock is never short of scenery as the entire walk features a breathtaking and everchanging visual. Framed by the ocean on one side and historic mansions on the other, the varying terrain made this a really nice multi-hour activity, even in spite of a periodic mist. We did the entire trail and then hopped on the trolley to get back to our car. The other main attraction in Newport are the Mansions. Being THE place to have a summer getaway way back in the day, many of America’s elite had incredible houses (cottages) built here. The Preservation Society of Newport County runs 11 of these mansions and they are available for tour. Most of them are near the Cliff Walk and along Bellevue Ave and we had time for only two. We kept with the theme of 2018 being about the Vanderbilt’s as we followed up our Asheville visit to Biltmore by seeing their two homes in Newport: The Breakers and Marble House. Both were remarkable. Outside of that, we ate at some delicious downtown restaurants and strolled Thames St. We also hung out along the multiple Wharf’s while watching the boats go by. Those that don’t have a boat or connections with an invite onto one, can still take one of several public boat tours. We didn’t have time for that, but I’m sure narrated information combined with impressive aquatic sights would make for a great time.

On the sports-side of things, Newport is also home to the International Tennis Hall of Fame and being the big tennis fan I am, my wife was kind enough to agree to a visit. This is the 7th sports hall of fame that I have visited (more on that in a future post) and though it lacked the pizzazz of the others, it was still an enjoyable tour through Tennis’ history. The actual setting for the HOF is the best I’ve seen as it is intertwined with Newport’s historic grass courts that have long been here, dating back to the days of the Newport Casino. The grounds featured people playing, plus we got to see 3,000-seat Bill Talbert Center Court, site of an ATP 250 level event during Hall of Fame weekend. What a unique place to watch tennis as the covered grandstand in the picture above dates back many decades. The only “stadium seats” in the place are in the taller structure at the far end as each other side features hospitality sections or tents. The Hall of Fame Tennis Championships are again an event certainly tailored to those in the know and with high-end connections. This would be a cool event to attend, but I would probably wait to see if known names make the Finals or Semifinals before forking over a three-figure dollar amount to get a seat.

The other stadium I saw was a quick 5-minute look at Cardines Field, Newport’s ballpark that is in downtown, just across from the Visitors Center. At 3,000 seats, this also doesn’t meet criteria for The List, but a visit is well worth it as the ballpark is a special one. Built in the late 1930’s, the mostly stone and wooden structure is quite unique in and of itself. With a youth game going on, I was able to step inside and wow-wie. Wooden stands are right over the field in a claustrophobic setting that I would be both nervous and excited to cram into with others to watch the game. It’s not just the seating bowl that is quirky, check out this website that lists all of the different aspects at Cardines Field (right portion of the page). There is an NECBL team that plays here as the Newport Gulls spend their summer in the ballpark. If you are a lover of sports or stadiums and are ever in the area, it is definitely worth wondering inside to spend 10 minutes in this beauty of a relic.
. 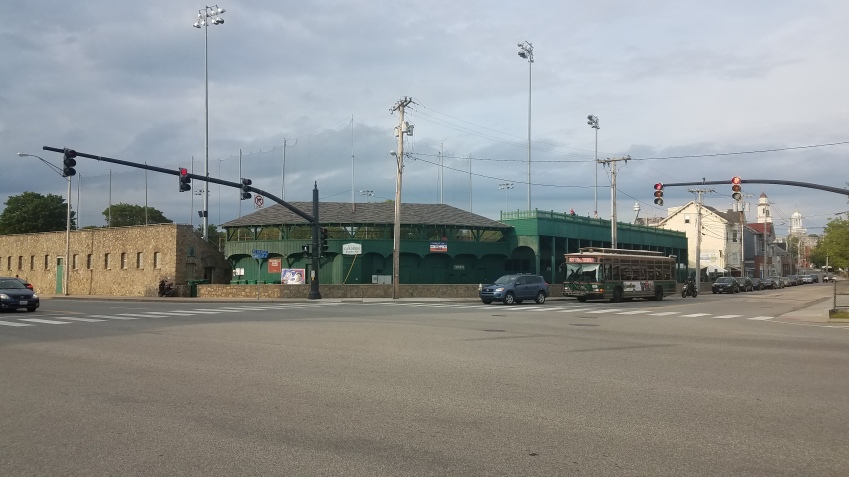