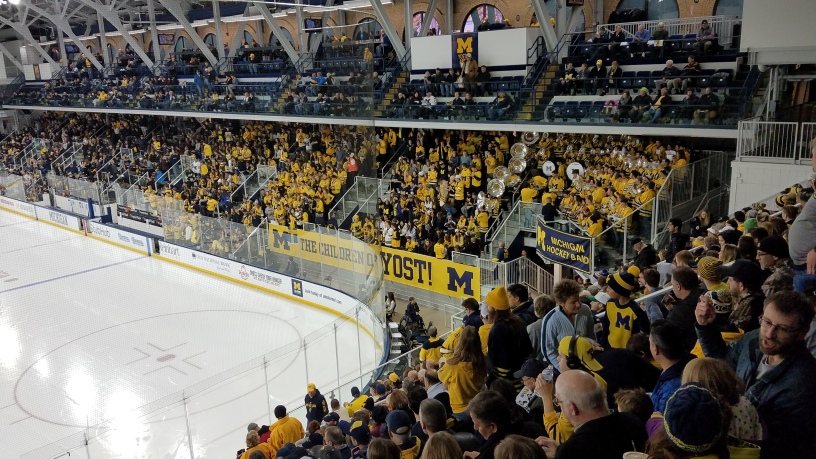 .
My “winter-sport” trip began appropriately as it was freezing, both in New Jersey and when I arrived in Michigan, where I wouldn’t see the temperature break 40 F the whole trip, despite the calendar saying November. The flight was on time and after about 10 minutes of initial bumpiness, smooth. Lack of earlier sleep made me opt for a brief hotel nap instead of a quick visit to the Stearns Collection of Musical Instruments in Ann Arbor. I staggered back to my feet for dinner and Zingerman’s Delicatessen was just what I needed, a hearty delicious meal. Zingerman’s has a crazy consortium of buildings and once I navigated it to the menu and ordering section, the big board blew me away. So many yummy choices! As badly as I wanted to try their renowned corned beef, I opted for #85, JVW’s Detroit St BBQ. It was then onto Yost Ice Arena for a bucket-list visit.

Yost is a historic old building evidenced on the outside by the brick facade and field house appearance. Inside, the renovations are obvious as the concourse displays and center scoreboard are most notable in regards to updates. The seating is awkward in that overhanging club sections make for a closed and almost obstructed appearance for the back four rows on each side. The design is such that each side has flat seating, so the corners are not a desireable place to sit. The inside does not do the exterior appearance justice and that’s because this is not an original hockey rink as it was retrofitted to become one in the 70s. What makes Yost special is the atmosphere thanks to the students and band. They were both phenomenal and made for a really fun place to watch a game. There are only a handful of stadiums that I have been to where I left craving more and thinking about the game for days after. This was one of them. Their “Sieve” chant is terrific and so is their originality, evident by the 10-year-old kid who joined them after the students went bonkers as he obeyed their request by taking his socks off on the zamboni ride. And that band! My opinion they have the best three-song combo in the country (Hail to the Victors, Lets Go Blue and Can’t Turn You Loose). The game was phenomenal as well after things looked bleak when Minnesota grabbed a 3-0 lead in the second period. The Wolverines came back and the game went to OT before Michigan’s Alex Roos put home the winner. Great experience that lived up to my lofty expectations.
. 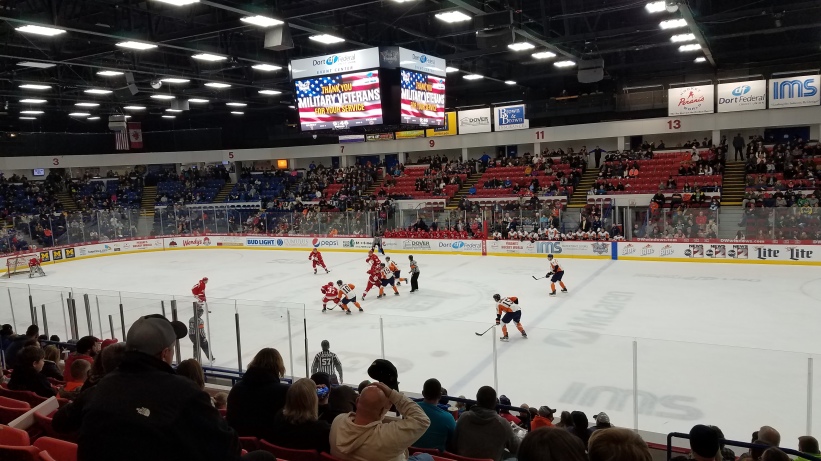 Saturday, I made the hour trip up US-23 to Flint. This is certainly a city that has it’s share of struggles, but media portrayal makes it seem like this is the worst place in the world and no one should step foot there. Absolutely not the case. As a visitor, I found enough to entertain me for the day. People were warm and in my driving and walking, I never felt concerned or threatened. I started in the Flint Cultural Center, a complex developed several decades ago to enhance quality of life for locals. I spent a couple hours in the Sloan Museum, which had a history of the city and several intriguing exhibits. There is also a huge kids section and it was quite popular, with the Clifford section being busiest. I love museums and have been fortunate to see some real good ones of late as Sloan ranks up there with the Alabama State Museum I saw earlier in the year. For lunch, I went downtown and explored the Flint Farmers Market, a year-round local shopping/eating destination. This place had everything and after a nice lunch at Steady Eddy’s, I wandered for awhile and bought a few things to bring back home. After a quick walk down historic Saginaw Street, it was off to Dort Federal Event Center for an OHL game with the Flint Firebirds. This building certainly shows signs of its 1969 birth, but a refurbishment has improved it into a quality OHL arena. Seating is simple and decent, while I really liked the concourse, which was baseball style as fans could walk around and still see the ice. It just needs more in the way of color and displays. The Firebirds had this game at 3 PM as it was part of a Veterans Day celebration that was very well done. The team did a lot of great honoring and there was even an Oath of Enlistment between periods. Unfortunately, the Firebirds fell to the Soo Greyhounds 8-2 as poor goaltending, penalties and some quality shot-making did Flint in.
. 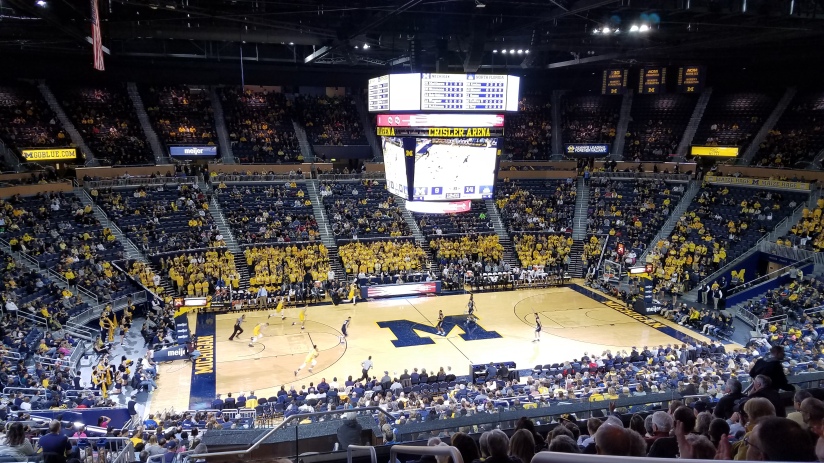 For the next game, I was eagerly watching the clock and my phone as traffic was building due to construction on 23-South. A huge thank you to Google Maps and technology as during my drive back to Ann Arbor, they deftly maneuvered me around 20 minutes of traffic and got me to the Crisler Center an hour before gametime. I needed every minute of that time as the arena is remarkably modern after a 2012 renovation. Concourse displays had so much for me to take in and I was really impressed at the crisp, clean nature of the building. I’ve always viewed Crisler as a dark and blah arena on the inside from my college basketball following and that is partially the case. However, arena seating is comfortable and their lack of a suite deck (replaced by “Champions Boxes” on a would-be middle walkway), makes for solid sightlines. Typical of most Power 5 programs, this non-conference game only filled half the building as the Wolverines played North Florida in a close one. Not until 10 minutes left, did Michigan pull away and the Ospreys look to have the capability to challenge for the A-Fun title this year. The students, while not as energetic or vocal as their Yost brethren, did fill their sections.
. 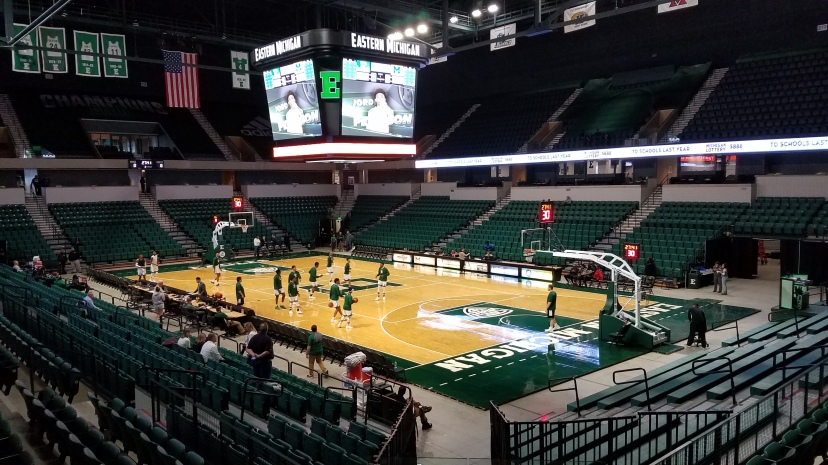 On Sunday, I spent the morning doing work-related stuff before heading to Ypsilanti. With rain falling and the thermometer nervously flirting with 32, I was thankful not to find any ice and that the temperature gradually climbed through the day. The Convocation Center was the destination as Eastern Michigan basketball took on Michigan, Dearborn that is. A non-D1 school is not out of the ordinary for the Eagles as they play around four per season. Their arena is a nice building, one of the best in the MAC. The spacious lobby a nice welcome and the interior is designed well for basketball. They have a beautiful scoreboard too. Unfortunately, not many see it as I counted about 350 in attendance and that’s not far from the norm as the team usually is last in league attendance. The Eagles predictably won, but it was an entertaining affair that had good pace. Final score: 97-73 over the Wolverines. I know their part of the UM system, but why can’t Dearborn use their own nickname and logo?

After the game it was off to DTW for a flight back home. A very successful and fun trip and thank you to those involved. 4 stadiums in 3 days: Yes! I will have the reviews on each one in the coming weeks.
.