.
This was a rare stadium trip that I was not looking forward to with my usual full enthusiasm for two reasons. First, I broke my finger playing football (Mallet Finger with a detached bone to be more precise), so the throbbing and annoyance of a splint along with the anxiety of an approaching hand specialist visit didn’t have me in the best of moods. Second, the beautiful weather was going to rapidly give way to snow and I feared for the drive back thru the Poconos. With that as a background, my journey up to Ithaca in the morning was delightful and I arrived at the Hoy Road garage a little early to do some exploring on the beautiful Cornell campus. Temperatures were in the 60s as I went with short-sleeves and I took a stroll to the Cascadilla Trail, where you could see why “Ithaca is Gorges”. I’ve been to Schoellkopf Field before, so I wasn’t in a hurry to get back and it was right at kickoff when I settled into my seat on the Crescent. This is one of my least favorite Ivy stadiums, but the view is at least a highlight. Interestingly, Cornell removed the stands from the visitor sideline because of “disrepair and lack of use”. Amazing that a school with such a huge endowment can’t put up some basic bleachers for the visitor side. Another huge boo goes to the concessions, of which there are just two stands and I missed nearly the entire second quarter by waiting 35 minutes for a sausage. Not a fan of this stadium. In the game, Penn took care of the Big Red 42-20 to give the Quakers a share of the Ivy title.

I’ve yet to walk thru much of Cornell’s campus, so seeing that this was not an official stadium visit and the game was well in hand, I headed out a bit early for another stroll. The grounds at Cornell are terrific and I particularly loved the central part of campus that included McGraw Tower, Uris Library and plenty of historical buildings with a few statues. Even better is the proximity to another gorge as the suspension bridge over Falls Creek is a must see. About this time, the temperature dropped 10 degrees as a cold front passed and the winds picked up…a quick reminder of the challenge ahead of me at the end of the journey. I hustled back to the car for one more stop before downtown. This one was to see Ithaca Falls, an amazing waterfall where I would have loved to relax at for more than a few minutes. I then drove into the center of Ithaca via their wacky, hilly streets and grabbed dinner at Red’s Place, one of many decent options.
. 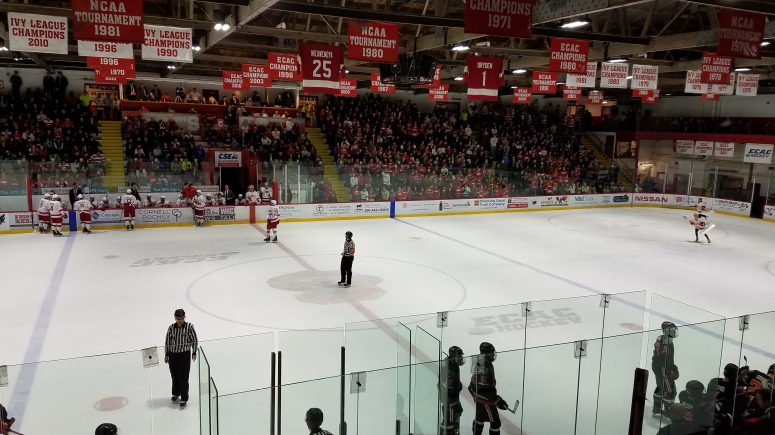 .
The main attraction for the trip was Lynah Rink, which would be Stadium #178. College hockey arenas have a reputation of being old-school and bare-bones and this was no different. I’ve been to so many minor-league arenas that it is refreshing to see a rink like this, though it does have some issues like the low hanging wood/duct work from the roof and the occasionally poor sightlines in various spots. It’s very hard to believe that the arena holds over 4,000 seats, but Cornell is quite precise in their media guide capacity. I’ve heard a lot about the Lynah Faithful over the years and the intimacy of the rink helps to make it a loud place. The fans indeed had traditional chants and cheers, making this a fun event to attend (but one that did not meet the hype, see the review for more on that). The Big Red did their part too, despite a poor start against perennially lowly Princeton. Cornell dug themselves out of a 2-0 hole and a third period comeback resulted in a 4-2 victory. Check out the full review, which will be posted on the right column in the coming days.

After the final whistle, I stepped outside to big, fat, sloppy snowflakes. Unfortunately a change from rain to heavy snow was going to last just a 4-hour period that aligned precisely with my drive home. I knew there would be a couple trouble spots: Route 79 from Ithaca to Whitney Point and the dreaded Poconos. With the elevation display on my GPS on, I headed out and got thru the first long stretch on the nervy two-lane road ok. After fighting off hallucinations while driving thru the constant steady snow that made it feel like it was “Star Wars”, road conditions were fine until the Scranton area, where coverage even at an elevation of 900 feet meant big trouble for the rise up to 1900′ in the Poconos. They had a solid 2-4″ with much of that on the roads and thankfully my wife’s Hyundai Santa Fe handled it ok at 25-30 MPH. That meant a white-knuckle hour before coming down the hill and seeing improving conditions. Even still, I was shocked at how hard it snowed and stuck when going thru NJ as my stomach dropping knowing our forecast for work did not go well at all. Four hours later, at 1:30 AM, I instead drove straight to work with jello-ie legs from the ride for a status check on how we were making out. The night didn’t end until I climbed into bed at 3 AM and as much as I enjoyed both Ithaca and Cornell hockey, it was a memorable trip for the wrong reasons. That’s the last time I make a journey with prospects of snow…..wait, didn’t I say that before?
.