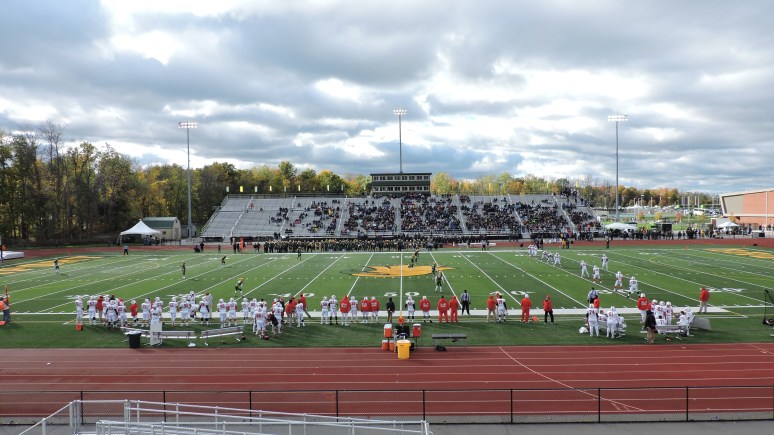 In my Guide to finding stadiums and arenas to visit, there is a seating capacity requirement. This is in place to try and weed out facilities that are just comprised of sets of bleachers and not really a “Stadium”. It generally works, but it is inevitable to run into some bare-bones facilities, especially in the world of football. Enter the visit I had this weekend, where we added Eunice Kennedy Shriver Stadium to the completed list at the College of Brockport. The school is one of 40 Division II or III football teams that have a stadium on The List and while the capacity of these select 40 are around many teams at the FCS level, the “Stadium” is much simpler. That’s not to say there aren’t any nice ones in D3 (check out Mary Hardin-Baylor, Linfield and Cortland), it’s just that this one was not it.

It was cold and windy in the Rochester area, especially given the 80-degree weather just a few days earlier, thus making the wind all the more biting. I layered up with winter clothing and after driving through the pleasant village main street, I arrived on campus about 30 minutes before kickoff. While growing up in the region, I’ve been to the college a couple times, for things I don’t remember, but this was my first football game. In 1979, Brockport hosted the Special Olympics, a fact that surprises many when hearing it for the first time. It was a wonderful, grand event and it resulted in the current stadium which was renamed from “Special Olympics Stadium” to “Eunice Kennedy Shriver Stadium”, in honor of the woman who founded the organization. There are also two remarkable sculptures on campus in honor of the games and these are not far from the parking lot, so I checked them out before heading in. They are impressive works and these gifts from a Soviet artist in the late 70s is a rare happy story during the Cold War.

Brockport’s stadium is touted as the largest in D3, but it is no more than just a significant amount of basic metal bleachers. It was homecoming and despite the crappy weather, a decent amount of people were on hand and the attendance number of 2,592 seemed accurate. They were treated to a decent affair between the Golden Eagles and Cortland. Brockport took a 14-13 lead into halftime and they extended it half-way through the third quarter when Nate Wilkinson made a ridiculous lay-out dive to catch a 46-yard pass in the end zone. It was a thing of beauty. The lead held up until Cortland finally put a drive together and they scored with 2:37 play to make it 21-19. With the crowd stomping the bleachers and raising the noise level, the defense made the stop on the two-point conversion and Brockport hung on for the win. The weather may have made things uncomfortable, but I thoroughly enjoyed watching a football game with zero media timeouts. It took 2:45 to play, which is about 30-45 minutes shorter than the agonizing FBS games, which I don’t know how more is not made of the slowness of those games. Anyway, congrats to Brockport. Numbers-wise for me that was: Stadium #177, Football Stadium #32 and Non-Division I Stadium #2 (Hersheypark Stadium was the other)