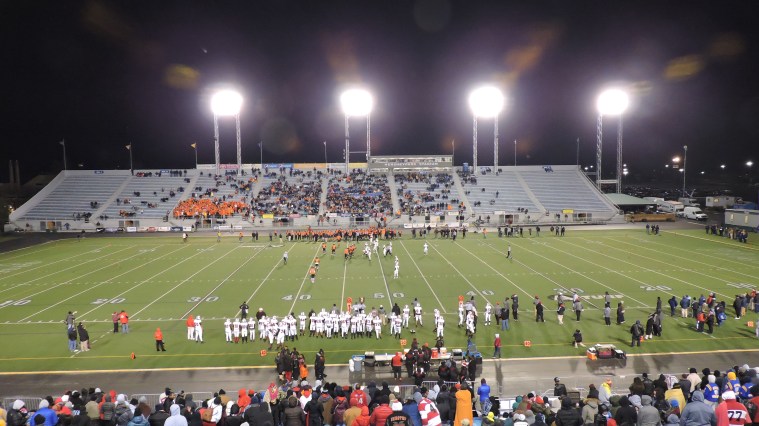 .
After visiting Giant Center and Hersheypark Arena, there was one more venue to see in Chocolate Town: Hersheypark Stadium. With so few sporting opportunities at the stadium, I jumped at the chance to finally get there for the PIAA High School Football Championship. I talked a few days ago about how I do not include high school venues on The List, but do include facilities that consistently host their championships. It was about 3:30 PM when I reached Hershey, only to run into a decent amount of traffic along Hersheypark Drive. Maybe it was from people heading to the light display, but it was still daylight. Then I considered the earlier championship game in the A classification at 1 PM and maybe people were leaving, but that wasn’t it either. The last thing I was thinking was a concert on a weekday afternoon, but indeed the Trans-Siberian Orchestra were playing the Giant Center at 4 PM, which lead to the jam up. (Side Note…I love their stuff. Have you ever looked at their Tour Calendar, they load up on shows right near Christmas and must make all of their revenue in this month, which makes sense). Thankfully, I’ve been to Hershey a few times, so I knew that I could avoid the crowds getting into the Hersheypark parking by staying in the left lane and parking at Chocolate World, then walking over to the stadium. I only showed up early so I could get some exterior stadium pictures while it was daylight and while walking around, I encountered Bishop Guilfoyle fans buying their championship sweatshirts after the earlier game just ended. With extra time to kill, I walked over to Hersheypark Arena, where it looks exactly the same as it did in 2010. I sat in one of their old wooden chairs, mesmerized by such a beautiful old building. Fifteen years ago, they still played professional hockey here…hard to believe.

I went into town to grab dinner at the Chocolate Ave Grill. My sandwich was just ok and the waiter paid no attention to me. Around 6 PM, it was back into Hersheypark, where the game I saw was for the AAA Championship as two teams from opposite corners of the state played…Cathedral Prep (from Erie) and Imhotep Charter (from Philly). I got there just as the buses from Prep did as the kids in their orange sprinted across the parking lot to the stadium. It took me a bit longer to get in as I changed in the car…the layers of clothing were necessary for my skinny frame to survive the windy, 35-degree evening. The stadium is split into two sets of sideline bleachers and each school gets a side. Once inside, fans can not cross to the other sideline. That’s bad news for me in trying to photograph the stadium. Wish I knew ahead of time or I would have got a press pass. So, I needed to be creative and after earlier failed attempts, I finally sweet-talked the security guards to allow me over. There are metal detectors before entering the concourse, which meant three separate occasions of taking everything out and passing thru. Once all my reviewing chores were done, I hunkered into an upper corner, seeking protection from the wind and watched the contest while sipping Hot Chocolate.

My re-introduction to high school football left me thankful I don’t regularly travel to these games. It’s been 15 years since I was student at Hilton High School and watched my classmates play, so forgive me if this is naive and no offense to the kids playing…but are these games really this horrid to watch? I expected a lot more from two teams full of Division I recruits and instead got a mistake-filled contest full of dropped balls, fumbles and the inability to throw a forward pass in the wind. The start of the game didn’t exactly get off on the right foot either: It began with a failed onsite kick, where a player was laid out and a subsequent 10-minute delay. The next play was a re-kick that was fumbled. Then the following play, the head referee was hurt after getting knocked over. Yikes. This also wasn’t the best display for the dangers of the sport as the cart and ambulance twice made an appearance. A few bad seeds on the Cathedral side also didn’t help further the stereotype of the overbearing parent of an athlete. Some moron yelled that the coach’s son (the starting QB) sucks and to sit him. Later in the game, I heard this same lunatic tell the kids to “break someone’s leg”. Walking in to the stadium, another idiot said the metal detectors were there because of the people from Philly on the other side. Finally, we have Chris Hagerty, director of “strategic initiatives” (what?) at the school who at their pep rally referred to Saucon Valley High School (the semifinalists who lost to Imhotep 72-27) as something that sounded “more like a salad dressing than a football team“. I ended up rooting for Imhotep during this game and they went on to cruise to the state title, 40-3. It was also impressive at the end to see the class and respect from the Panthers (especially watch the end of the handshake line at around 1:33 below). This is the first state championship for a Philadelphia Public League school and the team dominated the competition all season long. What they have achieved is quite remarkable. I’m curious to see if in the future, we’ll hear the names of some of these players at the next level. Mike Waters ran for 201 yards and had 3 touchdowns, while TE Naseir Upshur rumbled down the field after his two catches. The wind wreaked havoc with Prep as they had 25 incompletions on the day.

The combination of the cold, idiot parents and poor play made this one of the very few stadium trips I have not enjoyed. There’s only around 50 of these stadium/arena types on The List and I’m glad these visits will be few and far between. I’ll have a review of Hersheypark Stadium up in a few days and a Stadium Journey review is coming as well.
.