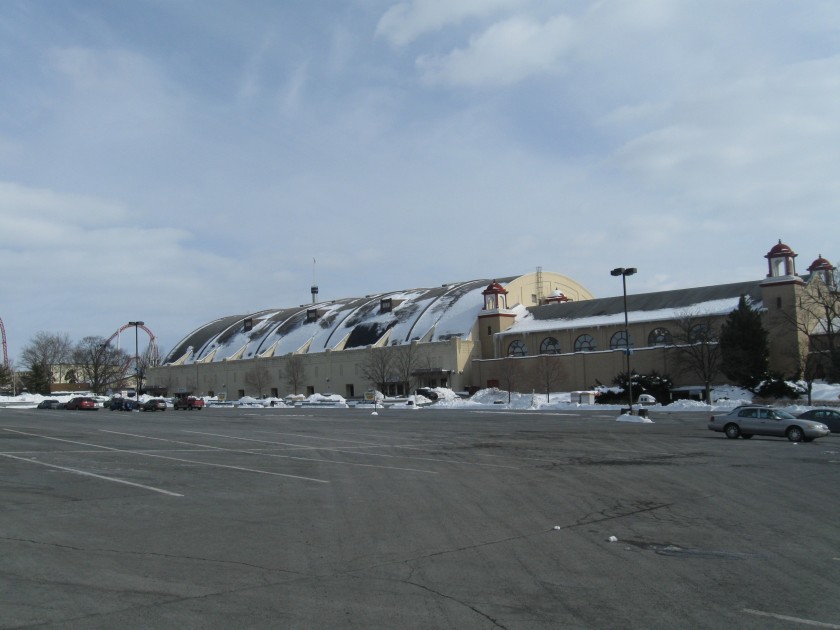 Hockey arenas are like baseball parks in that there are some old ones that become part of a fan’s life and are missed dearly when gone. Sadly there are not many Fenway’s and Wrigley’s left in Hockey as the old classics like Chicago Stadium, Maple Leaf Gardens and The Forum are gone. There are only a couple great classics left playing hockey and luckily in minor-league tradition rich Hershey, PA they have kept Hersheypark Arena running and hosting hockey games.

This was a last-minute trip as I had a day off and realized it’s been a long time since I’ve had a hockey arena visit. This is the second time we’ve been to Hershey and we went to luxurious Hotel Hershey to grab some lunch (it was almost Valentine’s day and all, so that counts for a romantic meal right?). Lunch was awesome and then we had some time to kill and decided to ride the Hershey Trolley Works for a little tour around town. What I didn’t account for was HUNDREDS of kids going to ChocolateWorld where the train took off from. Parking was a madhouse, compounded by the snowmounds taking up numerous spaces. We gave up, parked at the arena and then walked to ChocolateWorld to kill some time.

Game-time was 3:00 and I can’t tell you how happy I am that they kept Herhseypark Arena functioning. It is now home to Lebanon Valley College, a Division III school that has struggled mightily over the last five years to a record of 12-143-3 record, which includes a 0-23 start to this year (Side note….my alma mater Oswego State Lakers are 22-1-0 and looking for a second National Championship!!!). It didn’t matter who we were seeing, I was just glad to get into this place. The outside’s most distinguishable feature is the large, black arching concrete roof. When you step inside, I just can’t believe that the arena was hosting 7000 AHL fans as recent as 10 years ago and cramming them into this little boxed space to go thru the turnstiles. It is such a tight arena that there aren’t even concourses, instead short hallways that lead you to bathrooms and food. But that’s what makes it special…your here for hockey. And that is most evident in the seating bowl: No center scoreboard, no suites. Just wooden seats as close to the ice as possible. The pitch in the upper-deck is so steep and the sightlines are terrific. They still have hand-operated standings underneath the scoreclocks. It feels the arena never changed from 1936 – 2002 with the exception of Hershey’s Calder Cup Banners. Hersheypark Arena is so intimate and the whole place just has such a cool feel. Many times, I just drifted off imagining how loud it got inside and what a cool experience it would be to watch a game. While searching around online for random reviews/info on the arena, I found HersheyPark Arena best described by a writer from On Frozen Blog 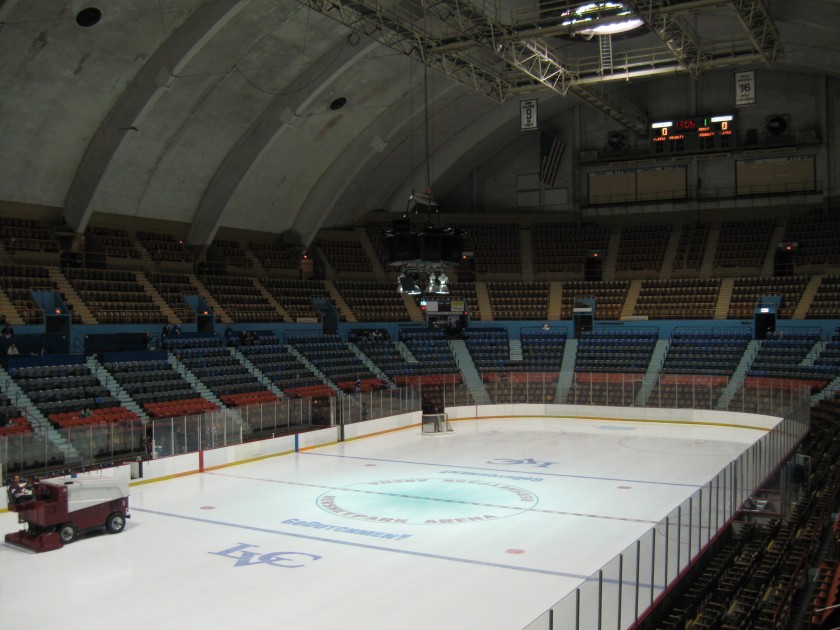 LVC put up a good fight in their last home game, but turnovers that led to goals in the 1st Period did them in. They cut a 5-0 deficit to 5-2 and scored two in the last three minutes to cut the Hobart lead to 6-4, but it wasn’t enough despite outshooting Hobart. Hopefully the Flying Dutchmen can get that elusive W before the season quickly ends. I really wish that the AHL Bears would play one game a year at the old arena (like what the Birmingham Barons do at Rickwood Field), but realistically I know that won’t happen. I’m just glad that Herhseypark Arena remains functional and continues to host hockey.