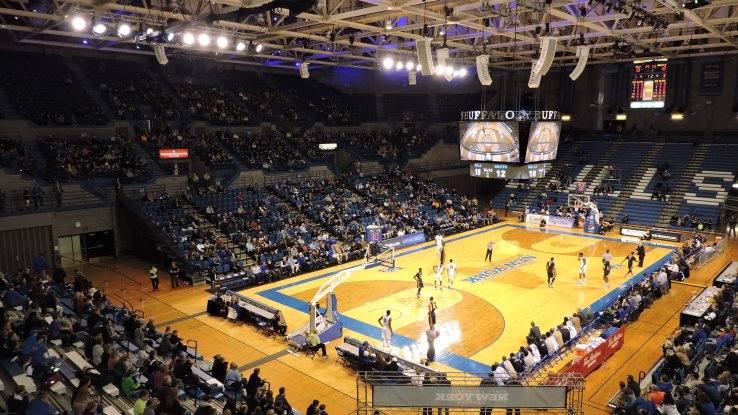 .
In Western New York, the Big 4 is made up of the four Division I schools in the area: Buffalo, Canisius, Niagara and St Bonaventure (though the Bonnies are a bit of stretch given Olean’s distance from Buffalo-Niagara Falls). Annually, these schools play each other and last Saturday, I took in the first installment of this local round-robin by heading to Amherst for the Buffalo-Canisius game. This was easily the most entertaining game I have seen live in quite a while as the pace was high. Jim Baron team’s love to push it and score and the Bulls were happy to oblige. UB started pulling away in the second half, however the Griffs kept the deficit manageable thanks to the inside-outside tandem of Kassius Robertson and Phil Valenti. With a few minutes left, Canisius was down six when they converted a layup with a foul. A bizarre sequence then followed as Jamal Reynolds missed the free throw, however there was a whistle and then a five minute discussion. The Griffs then took the ball out of bounds with the crowd stumped as to what happened. It wasn’t until reading a recap well after the game that we learned it was an inadvertent whistle and Canisius had the arrow. This is where college basketball could follow suit with other sports and make an announcement as to what the heck happened. The Griffs took advantage by scoring on the ensuing possession. A three with :52 remaining got them the lead and then a terrific block shot by Jermaine Crumpton set up a couple free throws and UB was in trouble down three with :20 left. However, a Jarryn Skeete bomb from the corner tied the game with seconds on the clock and it was on to overtime.

In the extra session, it felt like Canisius controlled the whole period, but the game was tied at 96 with less than a minute to go. A bobbled ball out of bounds meant we had to endure a third video review (Please NCAA, make Coaches Challenges!!! I can’t take these non-stop periods of officials hovered over a monitor). A turnover meant the Bulls could hold for the last shot and they took it down for a crazy ending as a defensive breakdown led to two players following Willie Connor. All alone to receive a pass under the basket was Nate Perkins and he slammed it home. Canisius got a poor shot off at the buzzer on the other end and Buffalo won 98-96. What a great game and I was able to get the last minute of regulation and overtime on video here and here. Sorry for the fuzziness in part of it as I learned zoom is not a good idea on my relatively new camera during video mode. If you can hear a couple of my groans, it’s because I was pulling for Canisius.

As for Alumni Arena, this was my second visit to the building, the first coming in 2004. This is such an ugly facility with the drab brown brick exterior and the sad “Alumni Arena” panel slapped on. The inside of the arena is strange too as the main seating is a three-tiered sideline structure that has the unique feature of the outer-most sections fanning inwards. Otherwise there is not a lot to like as many of the seats in the 200 and 300 sections have railings that obscure portions of the court. Seats are further from the court than you would expect from a 6,000 seat arena and that includes the other 3 pull-out seating areas (especially the ends). The one good part is the scoreboard and I especially like the metallic “Buffalo” wordmark around the top. Students were on Thanksgiving Break for this game, so the atmosphere was understandably down amongst the 2500 or so on hand. They applauded each basket and didn’t really get all that into the game, though they were certainly following intently. Only the game-tying and game-winning baskets brought the crowd to their feet (and it was maybe half of them at that). Another interesting note is the game I saw 11 years ago was also terrific as Buffalo tied the game on a dunk with no time left. They won that game in overtime as well and it came against Fairleigh Dickenson. Maybe I’ll try to catch the Bulls when their on the road too!