.
Even though the temperature never exceeded 8 degrees on my drive across Pennsylvania Saturday Morning, a bright blue sky was all that mattered. I could deal with the cold since I wouldn’t be spending much time outdoors, but gloves were certainly needed for the exterior photos. My first visit to Pittsburgh in 2008 was awesome and I really enjoyed the city. Driving though is a pain as while all the bridges, rivers and hills make for spectacular sights, the roads are confounding. At least getting to my first destination was smooth and I arrived on the Bluff for Duquesne’s home basketball game around Noon. I also got a great view of the Consol Energy Center as the home of the Pens is a couple blocks from the A.J. Palumbo Center. After dropping $10 for parking (boo downtown campuses), I got inside the small corridor and into the arena. I liked the bright layout and though simple, there were enough quirks to keep me interested. A 2010 renovation really did this place wonders and turned it into a quality small arena. There are four sections of seating divided between A and B levels with the corners open. With only about 1500 in attendance, I picked the B3 section to sit in, which was a nice elevated upper area that sits over the hospitality area. Renovations also led to wide chairbacks and a really nice scoreboard. A couple suggested improvements to the staff: add some signage in the building for the somewhat hidden downstairs corridor on the north side of the building. I had no idea it existed and it led to more bathrooms, concessions and basketball displays. Also, turn down the sound system and the heat. Otherwise, the building is a step up from conference foes LaSalle and Fordham, but not as good as their opponent on the day, Rhode Island. Full reviews on the whole experience will be updated soon.

The small crowd was into it for the first half as the Dukes surprised Rhode Island with decent defense and they had multiple double digit leads before the half. As the Rams crawled back, the fans faded too and the comeback was complete as Rhody took their first lead in forever with just 1:14 left. Duquesne’s Micah Mason (who was impressive on the day) made a floater to put Duquesne back on top. Only 21 seconds remained when Rhode Island got the ball back and after they missed on the ensuing possession, a scramble for the ball led to a foul and Jared Terrell made both for a 61-60 lead. Given my history with Rhode Island, I was convinced I’d see something special as Duquessne’s Derrick Colter let a jumper go at the buzzer. But it was not to be and the Rams escaped, and I mean escaped, with a one-point win. Blah, I can’t stand that maniac Danny Hurley on the sidelines (he got T’d up during the game) and watching them run off the court with a win sucked. For the Dukes, it’s been since 1977 since they’ve made the NCAA tournament and fans unfortunately are accustomed to these stinging losses. Fun fact, this is the fourth time I’ve seen Rhode Island play and all of the games have been entertaining. They are 2-2 when I’m attendance.

My GPS had some issues with the downtown roads, confusing them for the overhead interstates, so luckily I wrote down the way to get to the Liberty Tunnel and out of the city. I was on my way to California…the borough. It took about an hour to reach Cal U of PA, for my first Division II arena. They built a Convocation Center that should have been called the Controversy Center instead. A corrupt and blind administration led the push for the $59 million, 5,000 seat building. Keep in mind that the combined population of the borough and the college is just 14,000. A feasibility study pushed for a smaller, cheaper building, yet the now fired Angelo Armenti got his way and the school is stuck in debt. Not one event has sold the place out, even graduation. It doesn’t end there as enrollment is down, the school just laid off 30 of their staff and the football team had to forfeit a game this year because of players involved in a brawl in the town. Yikes. So while yes, this facility is nicer than probably half of the ones in Division I, it has not come without problems.
. 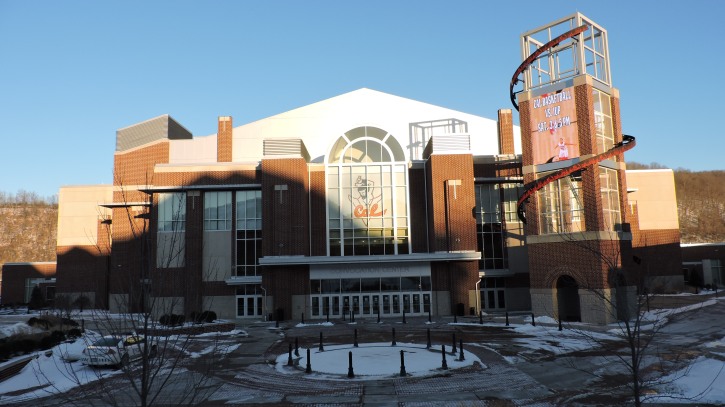 .
Putting that aside, as you would expect for that money, it is a nice place. The brick building starts with a video message board on the outside showing flames (the school is known as the Vulcans). Deep red seats wrap around 3/4ths of the court and they extend a good distance back with a wide walkway overlooking the floor from the top end. When I walked in, I was surprised to hear so much noise as the women were wrapping up and the crowd was really into it. Turned out to be a great finish and Indiana (of PA) won in OT. As I got ready to watch the same two teams with state names do battle on the Men’s side, it was surprising to see a good chunk of the crowd gone. That energy from the earlier contest disappeared too as each time a basket was scored, maybe 10 people clapped. IUP made sure to keep the arena quiet (though half of the fans inside were their’s) as they jumped out to a 20-2 lead and never looked back. The Hawks took care of CalU 69-45.

I stopped at Spuds in the sleepy town and though they specialize in funky fries for college kids, I got a decent sandwich in the completely empty place and got to my hotel to catch the end of the Ravens-Pats playoff game. It was back to Jersey on Sunday and expect to see a pair of reviews up on the website later this week. I’ll be writing for Stadium Journey as well. It was definitely nice to experience some college basketball again!