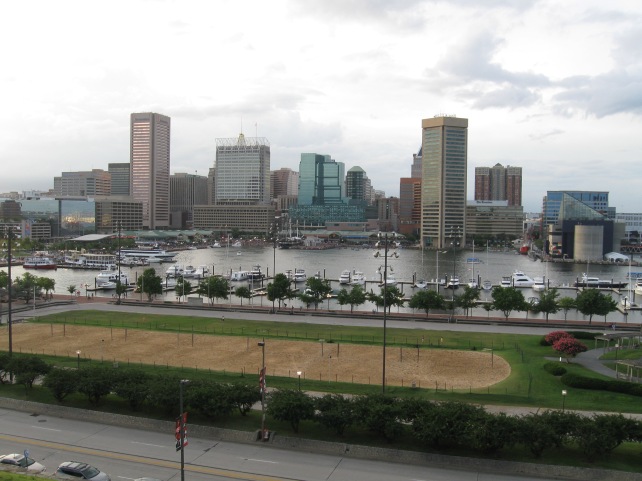 I finally made my way to the Charm City this past weekend and everything went smoothly for a pair of ballgames to go along with some sightseeing. The weather cooperated as there were no storms and although it was very warm and muggy, I thankfully missed the oppressive heat, which the East Coast is stuck in all this week. That would have made for some extra sweaty walking. Anyway, we got into downtown Baltimore around mid-morning Saturday and found a strategic parking lot that would work for both Camden Yards and the other sightseeing we would do through the day. The $25 hit was rough, but I made up for it the next day by finding a $12 all day garage. We started at the famed Camden Station, which now houses a Sports Legends Museum and a separate Pop Culture Museum (Geppi’s) on the second floor. Geppi’s basically took you through the history of entertainment in this country and had a staggering collection of comic books. The Sports Legends Museum was amazing and I easily could have spent 3-4 hours in there. Along with a complete history of the Baltimore Orioles full of memorabilia and nice displays, the museum also has another floor on Maryland sports, including a piece on the state’s stadiums and arenas. To end, there is a section on the Baltimore Colts and then the Ravens. I think I’ll be back here to visit again before a Ravens stadium trip.

For lunch, we ate nearby at Frank and Nic’s West End Grille, where the weekend-long wishing I didn’t have a food allergy to shellfish began. The wife had an excellent crab cake sandwich, while I went for a loaded salad that was still really good. The servers were very nice and Os fans started to fill the place up by the time we left. We still had time to check out the Babe Ruth House and Museum, which is inside the actual house he grew up in. It is a small museum that had interesting stuff on the Greatest Player of All-Time.
| 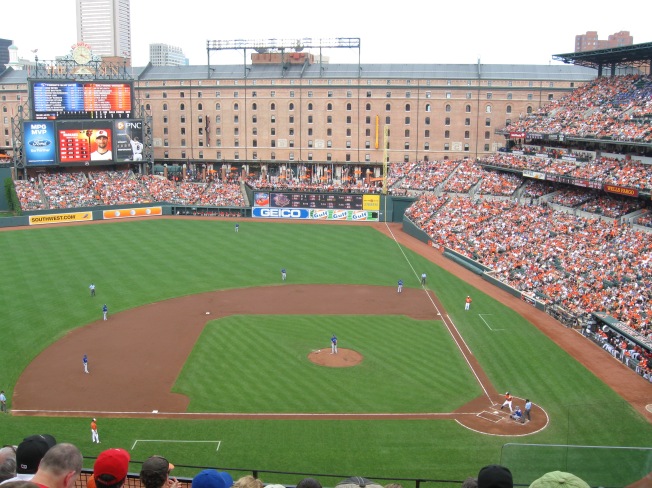 Then it was finally off to Camden Yards (cue the angel music). Two hours before the 4:05 PM start was just enough time to check out the ballpark and I started by walking around the entire stadium. That led me to famed Eutaw Street. It was jam packed as everyone was hanging out, drinking and eating. I definitely loved the area between the outfield and warehouse, but with so many people, I decided to come back later to enjoy. It’s amazing how many times I’ve seen a ballpark like this one replicated, but to see the original that started it all is truly special. All aspects of the park are great and most of the sightlines are excellent too (I say “most” because the seats at the back of the 100 level are not that good with such a steep overhang above). It was nice to see the place filled as often attendance has been lacking, despite the ardent following the Os have. The crowd was very into the game and Chris Davis hit his league-leading 36th home run, but the Birds fell to Toronto 7-3. I’ll write much, much more on the ballpark experience in the official review coming later this week and in an updated Stadium Journey review.

After the game, we still had some daylight left, so we walked over to Federal Hill for a beautiful sunset overlook on to Baltimore and the Downtown/Inner Harbor. Our hotel was near the airport about 15 minutes away (much cheaper) and after running into an absolute downpour, we picked up some food near the hotel and called it a night. Very surprising not to see a chain restaurant in an area of hotels, but instead Maiwand Kabob was there, an Afghani place. I took out and had a really good kabob. The hotel, however, was not good with a completely full parking lot, a leak in our room and a couple of spiders. This was a Hampton Inn, a place I always stay at on the road, but this was the first one I’ve encountered (out of about 10) that was inadequate. There still my go-to hotel, but just not anymore near BWI.

The next day we stayed in Baltimore to check out the Inner Harbor. I wanted to venture into more of Baltimore and some of their other nice neighborhoods (like Fells Point and Mount Vernon), but the main attraction of the city near the Harbor really is worth a visit. Such a great area with much to do and enjoy. The National Aquarium is a must (despite the $40 ticket), which we got to right away early in the morning. Lunch was at a brewpub on the east side of the Harbor and then my favorite thing to do in a city if available, is an observation tower. Baltimore had a great panoramic one on the 27th story of their World Trade Center. We just beat the Orioles traffic getting out of town at about 4 PM and then caught a little 95 traffic making the short trip up to Aberdeen for Stadium #138.
| 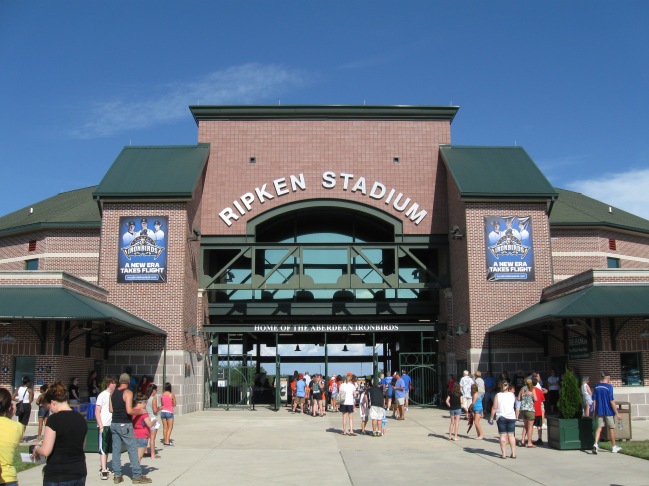 The NYPL’s Ironbirds are the home team at Ripken Stadium and much of the park is modeled after Camden Yards. That’s a great thing and I understand it, but it ends up blending in nowadays to a ballpark typical in Anytown, USA. They do have an excellent food selection here with a whole crabshack to go with many other options. I loved finishing off the trip with a slice of watermelon on a warm summer evening. The Ironbirds experience got off to a bad start in my book by their front office not answering four emails I sent to them over the course of a month (a pet peeve of mine when someone doesn’t answer emails). But the rest of the game-day staff was great and accommodating, not in a fake way either, but truly genuine. The game dragged on for a lengthy 3:12 and it was filled with errors as the Ironbirds couldn’t overcome an early 6-0 deficit and ended up falling 8-6 to Williamsport. That makes NYPL home teams 0-5 in games I see them play. On a good note, I got to meet up with Gary Herman again. It was great being able to catch up with him as The Prince was doing what he does best, attending sporting events. It’s amazing how much he has seen and how many places he has visited through the years. His sports weekend was spent in Pittsburgh, Baltimore and Aberdeen before heading back to NYC. Check him out at Royalty Tours USA.

Overall, a great trip and I kind of glossed over the ballpark experiences here, but will have their detailed reviews (on the right) in a week or two. Also, Stadium Journey updates to come as well. Stay cool!