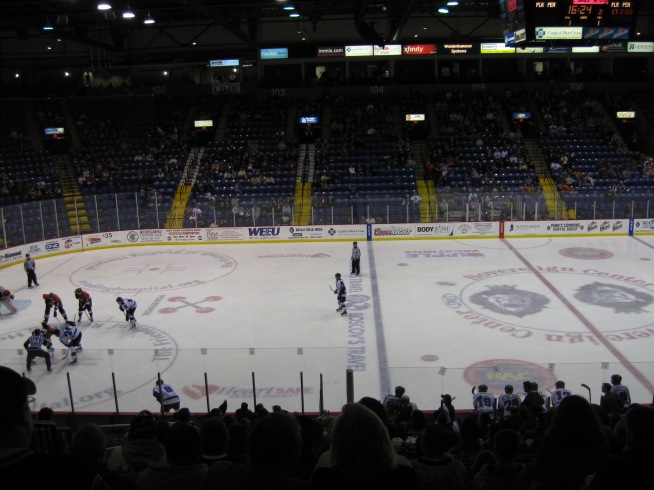 First, my thoughts and prayers are with everyone, especially those affected by the horrific tragedy yesterday. Like everyone, I can’t begin to wrap my head around what happened and unimaginable that nightmare is for some. Raymond Curren had a very good piece this morning, I encourage you to check it out.

My trip to Reading came with two goals…one to get another take on their home arena and the other was to quench my thirst for some hockey. I left work on time early in the afternoon and made the two-hour trip west. My first visit in 2005 came at night, so I wanted to make sure I got some exterior shots of the Sovereign Center. The arena is right downtown and while driving thru Penn Street looks fine building-wise as a mid-sized city, this was kind of a scary place. There were plenty of people out when I was walking around taking pictures, but several were giving that uneasy vibe (loudly swearing, just generally acting like punks). Walking around the vicinity of the arena is fine for games, but I don’t think I would venture much beyond there.

While having a little extra time, I drove a mile east to Mount Penn, which offers incredible views of the city and surrounding area. With Reading’s landmark Pagoda, the spot is famous in the area and after being the only one there, it filled up with photographers getting ready to catch the sunset. Heading back down the hill, I parked at a garage near the arena for dinner before the game. My plan was to eat at Jimmy Kramer’s Peanut Bar, which I thought was near the garage and arena. Google Maps put it near 6th and Penn, so you can imagine my confusion when all I saw was a bank, office complex and CVS. No restaurant. After walking around and not finding it, I settled for the Outside In Restaurant, a weird place on the second floor of an old school 80s-style mini mall. The food was blah (I had a chicken wrap) and it turns out that the peanut bar was on 3rd street, a walk I did not want to make.

Things got much better once inside the arena. The Sovereign Center was built in 2001 and it starts with a cool entrance as the chandelier from the old Astor Theater hangs above the small atrium. The concourse is full of decoration and food items, which I didn’t even mind it being small. Walls are filled with jerseys, Royals honors, timelines, a hat trick display and other memorabilia. Meanwhile, there are food stands everywhere with a ton of options. The Pit BBQ and Chickies and Pete’s were the big ones. The city known for pretzels, had an item that fit perfectly…a huge soft pretzel braid. Inside, the arena is simple (a one-level seating design that rounds the rink), but its one that promotes lots of noise with its small surface area. Though there were only a couple thousand on hand, the building rocked and there was a lot of energy from the fans. They really got into the game and even after the big win, cars were honking throughout the garage to celebrate. Speaking of that win, what a great game. After Reading’s Philipp Grubauer gave up some awful early goals, the Royals almost came back by cutting the Fort Wayne lead to 3-2. They then gave up what I thought was a demoralizing goal with 12.6 seconds left in the second period as Ryan Lasch got a hat trick. But one of the best team’s in the ECHL came out on fire in the 3rd period as they scored four goals and dominated play, eventually winning 6-4. Man, did I miss hockey. I’ll have an updated review done later today and also I’ll be writing a review for Stadium Journey that should go up next week.