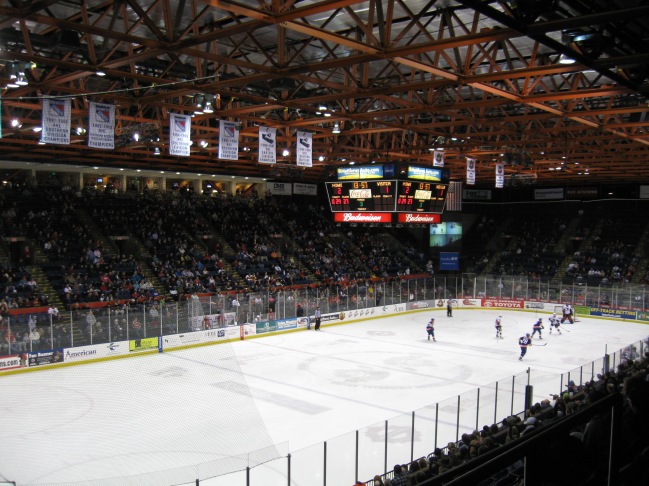 I took the rainy drive up I-81 on Friday to Binghamton for another look at the Binghamton Senators and their home; the Broome County Veterans Memorial Arena (longest name ever). First, I went a few miles out of the way to the suburb of Vestal so I could get some outdoor pictures of the Events Center at Binghamton University. My visit there in 2005 was at night, so I never got any good digital exterior pictures. Then, it was off to downtown, which is easy to get to from the south (using the Vestal Parkway) but really awkward for everyone else coming from I-81 / I-86 as the cloverleaf exit from Route 363 is kind of funky. Anyway, Binghamton is sort of a drab place that doesn’t really have much to do. However, there are several bars/restaurants near the arena including Dillinger’s and the Lost Dog Cafe, which is a short walk away, so at least there’s places to eat before and after the game. This was a rare instance when I didn’t get a ticket before the game and knew it wouldn’t sell out, so I bought one here to save on the crappy Ticketmaster fee. Didn’t think this would be a hastle as I wanted a ticket using a promotion ($4 off for AAA members), but after waiting in silence for about 5 minutes for a douchy young worker, I was told the computer wasn’t working and to head to the third floor. So, up I went (asking a very nice usher along the way) to the third floor, where I took the slowest elevator ever to the ticket office for my discounted ticket (they were all nice upstairs). Anyway, an odd start.

After walking around the city briefly, it was time for hockey in the BCVMA. I still felt like I was back in the 70s as the exterior and interior remains stuck in that era, especially with the reddish-orange color scheme. Despite the building’s shortcomings, I really like coming here to watch hockey as the sightlines on the side seating is excellent and the small, simplistic nature of the building really allows it to get loud. When I was here in 2004, it was sold-out and roaring…probably the best regular-season AHL atmosphere out of the nine buildings I’ve been to. But on this night, I was disappointed as only about 3/5ths of the building was full (announced crowd at 3,015). Like most places, Saturday Nights are better draws (the next night was 4,019, but thats still not a sellout), but even the people around me were commenting on the smallish crowd and it wasn’t as loud as it usually is. Being the worst team in the league this year may have a little to do with it, as a similar date last season drew a couple hundred more. Still, the atmosphere was decent, it just wasn’t at the awesome level I saw eight years ago. I’m sure the playoffs are fun here and the run to the 2011 Calder Cup must have been amazing. Check out the video below from a deafening BCVMA during Game 5 of the Finals:

One thing I like here is the city staying true to the Veterans Memorial part of the arena name. Numerous displays to area veterans are found in the concourse and even outside the building. Oh yeah, the game! Binghamton jumped out to a two-goal lead on Norfolk and had numerous chances to extend it to three, but failed. The Admirals quickly got one back to start the 2nd and the B-Sens missed a penalty shot in the period. Then after Norfolk tied it in the third, they won their seventh straight by scoring on a loose rebound with only :30 left. The groans were notacible from the Binghamton crowd as their free-fall continues in what is turning out to be a horrible year (their last in the AHL).

I updated the review on the right (#23 Broome County Veterans Memorial Arena) and you’ll see a review up at Stadium Journey soon as well. Next up for me…maybe a college basketball conference tournament game as there are several options (Patriot, NEC, Atlantic 10, Big East). Otherwise, the next official visits hopefully come in Toronto as I’m working on trying to set-up a late March visit to the Leafs and Marlies. The Leafs will be a challenge though as they have one of the toughest tickets in sports.