This past Saturday, I made the trip up to East Hartford, CT to check out the UConn Huskies’ beautiful new football stadium. The success of this program is amazing as they have won bowl games and done a tremendous job building their team as they have only been in the D-1A level for ten years. Rentschler was built about 40 minutes West of their campus in Storrs and I’m guessing it was to utilize open space and the population base of Hartford. That open space is site of one of the more interesting backgrounds for a stadium…it’s on an old airfield! Rentschler Field, the airport was an old airspace occupied by Pratt & Whitney and there’s a lot of history on this space. The surrounding parking uses this area and there are times when you are driving and walking on old runways.

Overall, what a great stadium this is inside and out. A beautiful outside face to the stadium (see above) greets the majority of fans on their way in. A lot of nice touches were created making the stadium experience nice. The Connecticut High School Coaches Association Hall of Fame is located in the concourse with a ton of informative plaques honoring high achieving athletes, coaches and contributors. There’s even a small room displaying trophies. In addition, on the South side of the stadium, between the two seating decks are large posters with Rentschler Airfield history and all of big events and famous people who have been associated with the site. The two-level seating bowl is good with a few quirks on the second deck making it stand out a little bit. I love how that second level stops at the West end making it wide open. They left this space for people to mill around and built the scoreboard here quite low (but easily visible to all). That low scoreboard leads to an open outside view with the small Hartford skyline in the distance.  I kept comparing it to the last college stadium I just saw (UCF’s Bright House Networks Stadium), because they are so similar, both around 40,000 seats and built in 2003-2007. UConn’s was better in many aspects. 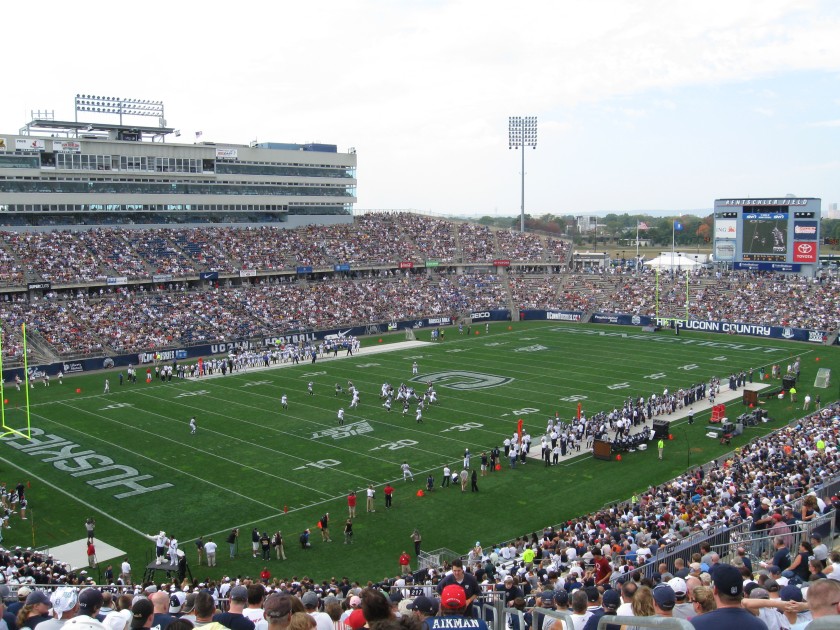 As for the whole atmosphere, I thought the tailgating scene was good. It was a morning tailgate with the start time being 12:00 PM. My favorite part was seeing so much Hartford Whalers memorabilia. Fans had flags, hats, I even saw a giant hockey puck. The passion for that franchise is still there nearly fifteen years after the team left. It would be nice to see them get a team back at some point. Plus, they have one of the most cleverly designed logos in sports (see here) and an awesome song (Brass Bonanza). Anyway, UConn’s numbers are really good, they sell most tickets and typically are 95% capacity or higher. The stands were generally packed and so was the student section. However, Husky fans are tardy as the place was only 60-70% filled at kickoff. A lot of fans left early too and I mean way early (mid 3rd quarter in a two score game). Overall, it’s a fine atmosphere with a few traditional chants and middle of the road stadium noise.

UConn ended up winning the game going way, but they had quite a fright in the first half as they played poorly. It looked like they would coast to a win, especially after getting a pick-6 three plays into the game and then following it up with another score on their possession. But they ended up tied at 14 at the half and I heard through the post game show that Head Coach Randy Edsell absolutely lit into his team. Both the starting QB and RB were taken out and the Huskies scored on four straight possessions as they dominated the second half. This game though was one of my pet peeves about college football…it took so freakin’ long. 3 hours and 40 minutes, if it was a close game it would have been four hours without overtime. UB ended up running an amazing 90 plays and had 29 third downs. If the NFL can have 3 hour games, why can’t college follow suit!!! Then again, I’m talking about the only sport/organization in the US that doesn’t have a playoff system to decide a champion.

Everything was smooth until my ride home when I had a trouble on I-95 South. I pulled into a rest stop just to get a bottle of water since sitting in that hot sun kind of drained me…but coming back to the car it wouldn’t start. It’s not a battery issue, but may be the starter. Anyway, by the time AAA came 45 minutes later, it started back up. Not that bad of a delay, happened in an OK spot and most importantly it was coming home and not going to the game! That was my first car issue in all of these travels, so that’s not bad at all and I hope I go another 92 without another.

The review to the right (#92 Rentschler Field) has a more complete review of the whole stadium experience. All of the other products on the site will be updated after I do a review/post on the New Meadowlands Stadium, which will likely be towards the end of the week.