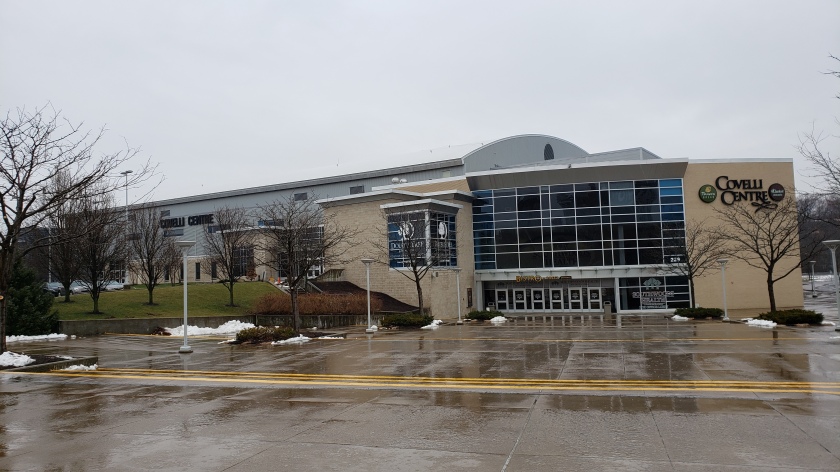 There are three sports facilities that Youngstown, Ohio has on The List and after seeing the YSU football stadium last October, I planned a return to see the rest. The drive there is almost solely I-80 and it is a road that goes on forever through the width of Pennsylvania. Probably one of my least favorite drives despite the lack of traffic as it always feels like you make slow progress. Once in Y-town, my road complaints increased substantially as the city streets are absolutely atrocious. Littered with potholes everywhere. The former steel town doesn’t have much for the visitor as I opted to skip the lone main attraction (Museum of Labor and Industry) for the Tyler History Center, which gives a more thorough overview of the city’s past. It’s small, yet enjoyable and I spent an hour and a half there. After getting some outdoor arena pictures in the rain, I ate dinner at a famed Youngstown spot: MVR. Thankfully got there early as it filled up quick and it was worth it as my Italian dish had some old school touches. The wooden salad bowl took me back to my Grandmother’s house.

The first game was a Friday Evening affair with the Youngstown Phantoms of the USHL. They play at the Covelli Center, located downtown, but in a rather devoid area. The building itself was pretty nice and it was a lot more sleek than I was expecting: a rung of suites above the bowl, a club section and a darkened interior done purposefully. Seating was comfortable and sightlines were solid. There wasn’t anything too unique, except for maybe the outside sound speakers reading off the building policies. Woulda been better with some music instead for the walk-up. Unfortunately, the crowd was small with only 15% of the building’s 5,900 seats used and as a group there wasn’t much enthusiasm, despite one of the best wins for the home team all season.  Green Bay jumped out to a 2-0 lead and they tacked on another one early in the 2nd. However through that period it became obvious this was not over as Green Bay took penalty after penalty. They also became whiners on the bench after perceived missed calls. Youngstown was able to make the impressive comeback by going 3 for 9 on the Power Play and controlling the game when at even strength. So much so, that the Ramblers only had six shots in the final two periods. The tying goal came with 6 minutes left in regulation and then the Phantoms got the win in OT thanks to a laser wrist shot from Georgi Merkulov.

The next morning, rain continued and I just chilled in the hotel room working on reviews before a small lunch. Then it was back to the campus of Youngstown State University for a 2 PM basketball game, ironically also against a Green Bay. The entrance to the Beeghly Center is poignant as a circular memorial is really well done. Once inside, things are aesthetically done well with colors, logos and displays. However, navigating the odd and small entrance with unmarked ticket windows was not great. The facility has a lot going on within it, but the main feature is the 6,300-seat arena. It’s a fairly standard mid-major set-up as the ideal seating sections are in the sideline red chairs. Sitting up in the wooden bleachers above still has a fine sightline, but the bleachers don’t feel stable as it felt like an earthquake any time a person walked up or down them. Youngstown delivered another terrific game and this one from the get-go looked like it would be good. Both the Penguins and Phoenix were high scoring and they both sat mid table in the Horizon League. It was even much of the way until UWGB broke open an 11 point lead with 8 minutes to play thanks to field goal shooting over 60%. YSU went on a 14-5 run to make it a game and the final minutes were highly entertaining as the teams traded baskets. Green Bay had the last say, but could not convert at the buzzer. For a second straight game, we go to overtime and Darius Quisenberry made an acrobatic layup with 11 seconds left to give the Penguins the lead 94-92. GB then turned it over and YSU sealed it at the line as they won by 4. Quisenberry finished with 24 while JayQuan McCloud had 30 points for Green Bay. Great trip, nice arenas and two enjoyable games…though not as enjoyable as Pete the Penguin breaking it down!