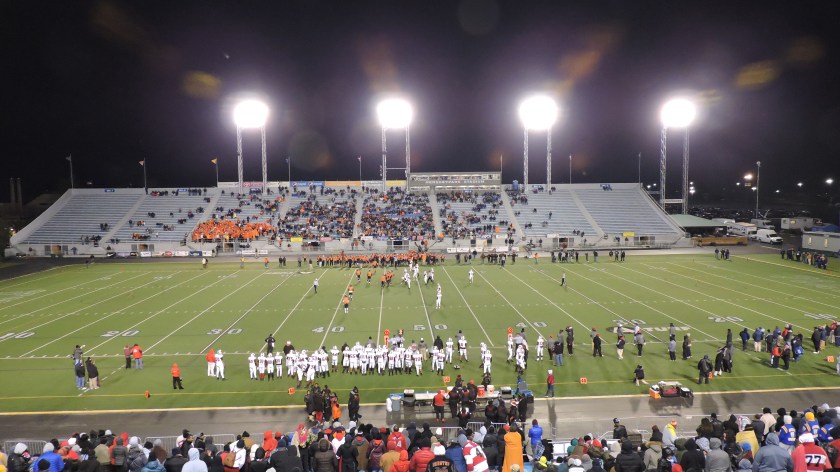 If anybody loves a bracket, tournament or playoff system, I suggest looking into the state championships for high school athletics. Each state has a different set-up and it is quite fascinating to look into how district/regional, then state champions are decided. This summer, I spent time looking into each state, in search of facilities that consistently host the season-ending event. The List does not include stadiums/arenas for high school teams simply because there are way too many to research (with limited data) as to whether seating capacity criteria is met. However, I do include neutral-site venues that annually host a high school playoff or championship game. While many are on The List already because it is home to a professional or college tenant, there are a total of 74 additional stadiums that make the cut as a visitable facility. I’ve been to two thus far: Hersheypark Stadium and Paterson Field. Below are six more that are worth going out of the way to see:

1. Wheeling Island Stadium (Wheeling, WV): Home to the state’s “Super 6”, the stadium is on an island in the Ohio River next to a casino/racetrack. The interesting setting coincides with a state that loves football as big crowds usually fill the 12,000 seat stadium. Bluefield (at the opposite end of the state) is making a bid to host, so we’ll see if this multi-decade tradition stays in the Panhandle (I hope so).

2. Martz Hall (Pottsville, PA): A special place to watch basketball at any level. Even though it opened many years later in 1970, it has a Palestra feel to it. Martz hosts District Finals each season, along with some of the State rounds. While in town, stop at the Yuengling factory for a tour.

3. Bank OZK Arena (Hot Springs, AR): Many overlook that Arkansas is the “Natural State” and outdoor beauty is all around. Hot Springs exemplifies this as you can visit the National Park while here for the State Basketball championship. It’s a modern arena that is part of the Convention Center.

4. Erie Veterans Memorial Stadium (Erie, PA): All roads lead to Hershey for the State Championship, but for those in Northwest PA, you likely will be in Erie first as this stadium hosts frequent playoff games. Opened in 1924, this historic horseshoe stadium got a nice facelift this summer.

5. Veterans Memorial Coliseum (Madison, WI): Not sure how long the Coliseum will remain, but for the time being, it is a great place for Wisconsin’s High School Hockey State Championships. This building has seen a lot of hockey and a trip to Madison is always a fun time.

6. Huron Arena (Huron, SD): I can’t explain it, but there is something I find unbelievably charming about seeing a playoff game in the Dakotas or Montana. Small towns getting behind their local high school team feels so different compared to the big city, pro sports fandom I encounter on the East Coast. I could have picked a number of towns and their civic arenas, but I went with this one that could hold 1/3rd of it’s population in this arena. This picture says it all to me