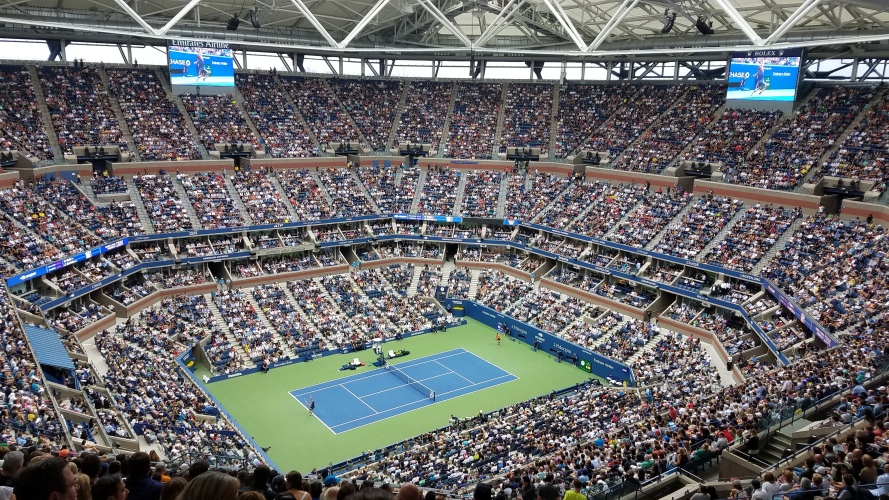 .
Thirteen years ago, I moved to New Jersey and a nice perk is being an hour or two (depending on mode of transportation) from New York City and all it has to offer. Being a huge tennis fan, I couldn’t wait to make it to the US Open, but year after year, it just never worked out. While watching the tournament this week, I kept getting this deep urge to see it live. Ignoring my usual long-range scheduling and planning, I decided just 24 hours prior that I was going to Queens. The Men’s Semifinal match-ups were enticing, the weather was perfect and I had a half-day at work. After waiting until the last minute for price drops on the secondary market, I got a single seat way up in the rafters way of Arthur Ashe Stadium and after reading this ultimate guide, I made my trip in.

Plotting the best way to reach the tournament always has multiple options and I decided to take NJ Transit from Denville. It’s a longer trip then my normally-preferred method of driving to Secaucus and then taking a 10-minute train in, but a $30 parking lot on weekdays deterred me from that option. What I didn’t realize was that Denville has a $3 parking charge Mon-Fri, as like everything with all modes of transportation around the Tri-State, local knowledge is needed since things aren’t always exactly clear. I had seven minutes to make the train and I couldn’t find the pay station in time (in the secondary parking lot, which I didn’t know was the paid one) and made the split-second decision to just get on the train anyway instead of waiting another hour for the next one. Thankfully, my wife was out-and-about and she kindly was able to drive to Denville and move my car along with paying for the spot, thus avoiding a ticket and fine. With that taken care of, there was one more train needed as I got off at Penn Station and opted for the slightly more expensive Long Island Rail Road to reach Flushing Meadows. This was faster than walking eight blocks to get the 7 subway. And with that I had finally arrived!

Watching this tournament my whole life, it was special to walk around and see everything: the fountains, the Arthur Ashe statue, Court of Champions. I spent awhile on the grounds and really enjoyed the amount of plaza’s that allowed for fans to take it easy between play. There are tons of food options and of course, it comes at a hefty price. I considered splurging and getting the long-time signature cocktail, the Honey Deuce. Just couldn’t bring myself to spend $17 on a drink. Matches on all the outer courts were juniors and I wanted to take one in, but at this point, it was 3:00 PM and I wanted a tour of Arthur Ashe before the first Semi began. My plan is to go back next year and just do Armstrong and Grandstand, which is when I’ll do official stadium reviews for those. Heading into Ashe, I gazed up at the behemoth, knowing my end seating result was going to be a hike. The climb up thankfully involved escalators (going down does not), however, I was disappointed to see that the lower-level concourse was reserved for only patrons with seats there. That meant that all of the upper seats, at least 10,000 and probably more, have to squish through a single concourse that lacks a lot, namely comfort between sets. That’s a horrible set-up. As far as inside the stadium, some have called it the “Worst Stadium in the Country“. I wouldn’t go that far as there are some positives. For one: the roof and roof support adds a huge layer of comfort for fans as the extra shade is huge. Most tennis stadiums in North America, lack shade. Also, the stands are nicely steeped and that creates a favorable angle to seeing the court. However, that steepness is also a negative because the stadium is way too freakin’ big and it is a hike and a half to get to the top of the upper bowl. It is extremely rare to see Ashe completely full and it was unnecessary to have that many seats, thus leading to pretty crappy, unintimate views for so many. Then, you also have abundant catering to the high rollers as the small (but insanely priced) lower-level is followed by two rungs of suites and then you finally get to the more distant seating bowl for the regular folk. Despite all the negativity, it was special for me as a tennis fan to finally sit in this stadium for a match.

Made all the better was a mouth-watering semifinal card that first featured Nadal and Del Potro. While absolutely respecting what Rafa has done, I’ve never been a huge fan and I was pulling for DelPo in this one and it was fun to savor all the Argentine fans in the house. The first set was what I expected, a grueling and entertaining battle that lasted over an hour featuring booming ground strokes from DelPo and ridiculous speed by Rafa. Then, in the second, DelPo took over and at the end, it was noticeable that something wasn’t right with Rafa given how he was rushing serves. I took out by zoom camera to watch the chair closely and sadly, he needed to retire. Disappointing, but I was happy to at least see a quality set. That also meant I didn’t have to debate leaving early in the second match for train-catching purposes. The nightcap featured Djokovic and Kei Nishikori, two guys I really like. With Novak, he’s my favorite of the Big 4. He’s very personable and quite involved with fans and kids (love this clip), but I never understood why the crowd doesn’t warm too him and it makes me feel bad because I know he desperately wants that love. If Roger or Rafa are playing an underdog, New Yorkers never pull for the dog, despite their normal love for one. But with Novak? They always do and that was apparent with a huge urging on with Kei. Some might argue it’s because in this instance, they wanted to see more tennis after the short early match, but I’ve seen this before and it was more than that. I whole-heartedly gave some encouraging yells to Nole (always wanted to do that) and he dominated this match. His flexibility is so amazing to see in person. His 6-3, 6-4, 6-2 win capped a memorable day. I can’t wait to get back to Flushing Meadows in future years to experience the other stadiums in the complex.