.
The trip to Michigan began early on a Friday Morning and I mean early as we were out before the sun was. We took a route that included Canada and it worked well with very minimal border delays in Lewiston and Sarnia. The early start was so we could spend the afternoon in Ann Arbor, in addition to grabbing lunch with Stadium Journey founder Paul Swaney. It was great to catch up and after we parted, a long walk around downtown and campus quickly burned off the duck sandwich I had. Both were awesome as A2 has a terrific downtown full of local restaurants and establishments, while the University of Michigan has a campus featuring several sights to check out. The Law School Quad, the Cube and the Library were among our pit stops, as was Pinball Pete’s, where I smoked my brother in multiple gaming challenges.
.

.
From there, we made the 20 minute drive down Washtenaw Ave to Ypsilanti and Eastern Michigan University. First, we had to stop for a close-up look at the Water Tower, which looks like, well, you decide for yourself. Some locals describe Ypsi as the Brooklyn to Ann Arbor’s Manhattan and while I’m not sure that analogy works, I get it. We took a quick drive downtown and then went to the small couple block section of Depot Town, a popular area for an evening dinner. That’s all I would recommend because after a drink at the Sidetrack Bar & Grill, we walked down to the park (still in the daylight) along the Huron River, only to sift through sketchy characters and a plume of weed. The EMU game against Wyoming began at 7:30 PM and we were there early enough for a stadium tour and pictures. It’s a basic facility that is very typical of the MAC and the Eagles try to make themselves stand out from their big brother 20 minutes away by having a gray field and playing up The Factory theme. I could certainly do without that field color, but the rest of it was good and I applaud EMU efforts to draw fans. It wasn’t a big crowd for this Friday Night game, but they were noisy and showed great resiliency in their cheering as the team toyed with their emotions. The Eagles came back from a 17-3 deficit and eventually took a 20-17 lead when their QB threw the most egregious interception I have every seen, right to a Cowboy who walked in for a TD, giving Wyoming the lead back with 12 minutes to play. Given Eastern Michigan’s 7-41 record the last four seasons, you can’t fault many in thinking it was over. Not-so-fast-my-friends. Backup Brogan Roback stepped in and led the home side to a game-winning touchdown with less than a minute left. The Eagles went on to enjoy their first home win against an FBS school in nearly two years. The fans, who were eager to salute their team, didn’t get to do so as the players quickly exited to the locker room when a large group of protesters moved on to the field after the final whistle. It was certainly an overlying story during the game and it became the main talking point immediately after. Problems on campus led to the peaceful protest and while I won’t elaborate or get into social issues/politics here, but you can read more elsewhere and for those that saw the game on the CBS Sports Network, I heard that the crew did a terrific job covering the why’s of what was going on.
. 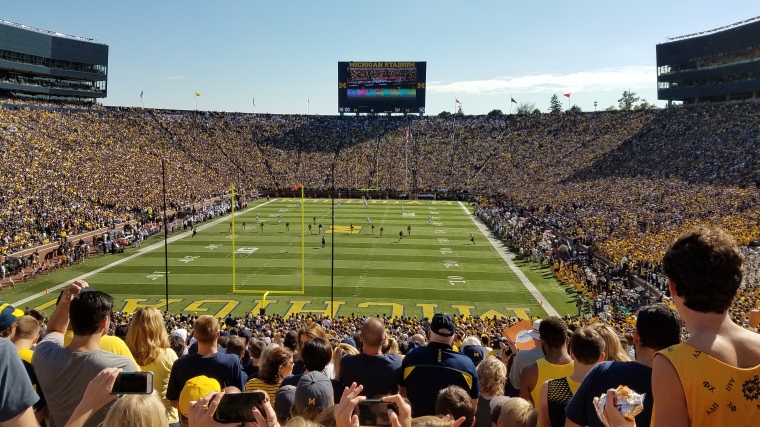 Saturday was Michigan football day and with the game starting at 3:30 PM, plus College Football games taking forever, this would be a day long event. No complaints here as it was awesome to be in Ann Arbor and Michigan Stadium on game day. From our hotel, we got into town around 11 AM and the $20 Hill Street garage was a solid parking choice that served us well (though it was a close call as maybe 40 spots were left when we arrived). It was nearly a mile walk to the stadium, but that was fine as we got to sample the pre-game festivities and parties going on during a beautiful morning. After pictures of both the stadium and Michigan’s other athletic facilities, we went to the Football Museum in Schembechler Hall. Recently re-done, this is a must for anyone visiting as it is doable in an hour and quite enjoyable. Michigan Stadium has a nice looking brick exterior from the renovations that redid the concourse and side towers, then inside is a stadium better than a bowl as it fits the shape of a football field very well. Large and simplistic, the stadium quickly fills up with over 110,000 wearing the Maize and Blue, making for a wonderful sight that makes college football the most eye-catching of sports. Despite the late September sun beating down, I had goosebumps with their own goosebumps when the marching band came out, then the famous M Club sign and finally the football team. I may have grown up as a Syracuse fan, but Michigan was on TV a lot when I was a kid and that catchy Victors fight song was always in my head on football Saturday’s. Hearing that in person along with the “Let’s Go Blue” song was amazing. As for the game, Michigan laid the smackdown on Penn State as they quickly jumped out to a 21-0 lead and the total yardage was laughable at the end of the first quarter. The game quickly turned into an FCS-like blowout and Michigan won 49-10. After the game, we walked over to Cliff Keen Arena to watch the Wolverines volleyball team take on Iowa. This let traffic disperse while we enjoyed a sport that I’ve really taken to. This small venue (1,800 seats) doesn’t make The List, but it still was worth the pit stop as Michigan won 3-1. We moved our car then downtown for a late meal and with most of the restaurants packed, we choose a sandwich at the Maize & Blue Delicatessen. Solid decision.
.

Sunday was another early start as we drove from Ann Arbor to Orchard Park, via Canada once again. After I got past my mistake of switching lanes at the border crossing near Detroit and getting scolded (despite all of two lanes open and a 5-minute wait before trying to make the switch to an open lane, whoops), we made the trip with no issues and good timing. Thank you by the way to the douchy Penn State fan in front of us at the Michigan game that provided our made up entertainment for the trip back. We got to Orchard Park right at Noon and my brother’s clutch work tickets in the Jim Kelly Club meant primo parking and decent tickets. I circled the stadium for post-renovation pictures and settled into the seat at 12:57 PM. Last week, as a typical Bills fan would, I griped about having to sit through another crappy performance, but quite the contrary as players love Rex Ryan and played play hard when his job is on the line. Buffalo dominated Arizona and the game was a blast. The stadium was absolutely rocking and very loud. I hope so much that this stadium survives as it is such an old-school place with an atmosphere at the top of the NFL. With random bursts of Shout, we walked out of the stadium to conclude a terrific trip.

Fun facts…home teams went 4-0! That is the first time since February 2012 where the home teams went undefeated on a stadium trip. The Bills win also meant that they are 5-0 in games I have attended in person. We did a lot of walking on this trip: 23.2 miles in three days. Thanks to my brother Eric for joining and providing high-quality, mostly immature humor throughout. It will take me awhile to get detailed reviews of each stadium up, but you can expect over the next couple weeks for these to be completed and they will be on the right column and this post once their done (Rynearson Stadium and Michigan Stadium).