Before getting to the games involving the Penguins and the Otters, this trip started on Friday with a basketball game. After another 2 AM shift with an early morning snow, I was able to squeeze in an hour nap before heading up to the Finger Lakes. The Ithaca Ale House makes some really good burgers, so I stopped there before going up the hill to Cornell’s confusing campus. Newman Arena is home to the Big Red and it really is a glorified high school gym. At least the displays in Bartels Hall, an adjoining concourse shared with Lynah Rink, are pretty decent. This was an important game in the Ivy League as Yale needed a few wins to clinch at least a tie. The Bulldogs jumped out to a big lead and then Cornell closed it to 22-18. Then, Yale blew the game open as they simply outclassed the Big Red, winning 88-64. A couple hours later, Harvard beat Princeton and that set up the Bulldogs winning their first Ivy League Title in over 50 years the next night with a victory over Columbia.
.

Following Cornell, it was on to Rochester to pick up my brother, Eric, and then we drove to Pittsburgh on Saturday. If you need a hotel, I highly recommend the Hampton Inn Downtown as the location is perfect, parking is free and the price is right. We set up shop there and then walked to the Consol Energy Center. The strip along 5th Ave in front of the arena is a disappointing slew of older buildings and businesses as we settled for “The Souper Bowl” for lunch. It was a crappy one all around that is not worth elaboration. Gametime was 3 PM and I took my usual laps around. It’s a nice building (at 6 years old, it should be) and it has all the bells and whistles expected nowadays. There’s a great feature in the lower level with an interactive display of players and moments, but half of the monitors didn’t work. Inside, again, nice sightlines, it’s just that I have an affinity for the older buildings and the Igloo was unique, while the CEC is the same design seen all over the place. As for the game, the Pens converted their few chances into a pair of goals and they were tied with Calgary at 2 going into the 3rd period. From there, the Flames grabbed the lead and the boobirds came out as Pittsburgh lost an uninspired game 4-2. For much more arena experience details, check out the official review on the right-side of the page in the days to come.

After the game, we took the Light Rail to Station Square and then up the awesome Monongahela Incline to Mount Washington. I could walk that area all day with those breathtaking views. Dinner was at the Shiloh Grill and their food is just as amazing as their creative menu. We went back downtown afterwards, where this 32-year-old fart crashed in the hotel while my brother sampled the Steel City nightlife. The next morning, we checked out the Heinz History Museum, where we spent half the time acting like a kid again as they just opened a temporary exhibit highlighting classic toys. Two levels of the museum are devoted to Western PA sports and most of our time was spent here, though the Heinz section was quite interesting too. Then, it was on to Primanti Brothers for Pittsburgh’s most famous food item. Here’s a description and picture of the sandwich for those unaware and I gotta say, it is good, but I wasn’t gaga over it. The fries just dominate the sandwich and I can’t taste much meat. Regardless, it is certainly something to try when in Pittsburgh. After lunch, we walked off the likely 1500 calories we just ate by going down the Strip District. This literal strip between the river and hills feels and looks gritty, but it really is a great place to shop, eat and walk.
. 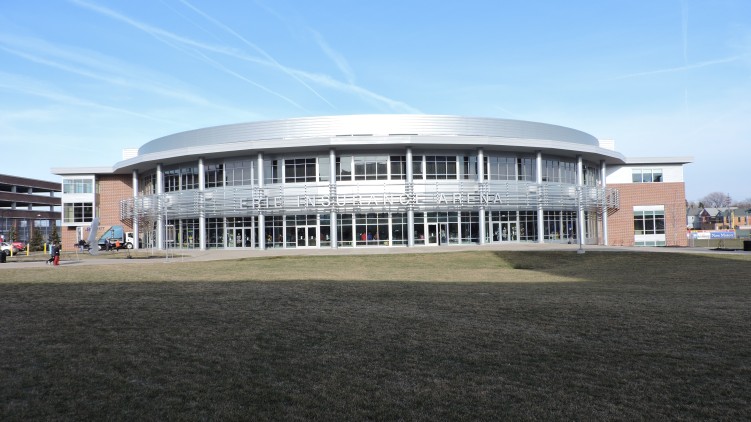 Two hours up I-79 is Erie and that was the site for our third OHL arena visit. I was here back in 2002 when it was known as Tullio Arena and I was planning on calling this a “re-visit”. However, after seeing the extent of the renovations that changed so many parts of the building, it’s hard to not consider this a “new” arena. I hate doing that as it brings up the question of “Where do you draw the line between renovation and rebuild”. This is a rebuild as the exterior and concourse are completely different and while the interior has the same shape the seating design is different. So, like PNC Field, we’re going to the very rare situation in treating this as a new arena. And it is a good one! The sleek, rounded entrance leads to an inviting concourse. Then, the horseshoe seating design is intimate and conducive for noise, where Erie notoriously excels. This is a loud building and when the Otters are good (like now), the atmosphere is fun. McDavid jerseys were everywhere as we took our seats for the 5 PM game against Niagara and despite a 48-12-1 record, the Otters fell to the IceDogs 4-2. A review on the experience will follow soon. That wrapped up our hockey venture as all went well in the western half of PA!