.
Out of the 51 minor league ballparks I have visited, MCU Park in Brooklyn is rated the best. Given this distinction, I felt I owed it to the other ballparks (silly, I know) to truly make sure it is the best since my last visit came in the earlier years of this stadium chasing project. My first experience in the Coney Island section of Brooklyn was indeed awesome, except the whole getting there part. Driving in this madhouse was not good times and looking at the NYPL schedule, a Sunday game would work the best, which coincides with jammed beaches. So mass transit was the alternative and it meant an experience on three train/subway services. I’ve been around NYC several times, so while none of this travel was new, it still is a bit unnerving for me given my bloodlines not being from the area.

On Saturday, our family drove out to Long Island for a surprise retirement party thrown for my wife’s uncle. On the way, I left my car at the Denville NJ Transit station for the end of my journey. While my wife took the car back home Sunday, I got on the LIRR at Farmingdale, where the 30 minute train ride would stop at the transfer station in Jamaica. I’ve always heard “Never change in Jamaica” and been perplexed by that since that is where most commuters need to change if going to other places that their train does not offer. The process seemed simple enough and the TV screen showed Track 2 as the spot for the train to Brooklyn’s Atlantic Station. Fail. Turned out to be on Track 1 and only when I saw a few other people confused and scrambling to the other side did I realize their error. Once I made it to Brooklyn, it was off to the subway, where I managed to find vending machines only accepting EXACT change, so there’s now some extra cash on my Metro card that will linger for awhile. It was simple enough to find the D train that went to Coney Island (following people in beach gear added extra peace of mind). However, this subway took forever as construction on the N line meant that it was picking up those stops too and it was taking long enough that I asked someone on the train if this does indeed go to Coney Island.

It did and I stepped out into a refreshing ocean breeze that felt so nice compared to the heat that was baking inland. Hoards of people swarmed Surf Ave and though the chaos of the area is overwhelming, it is remarkable to take in all of the famous sites. Nathan’s Hot Dogs, Luna Park, The Cyclone, Boardwalk Games, The Beach and The Ocean. It’s hard to believe that Hurricane Sandy devastated this area just three years ago and seeing the resurgence is inspiring. In fact, Luna Park and its famous rides were in jeopardy of closing even before the storm hit and it makes the successful turnaround even more remarkable.
. 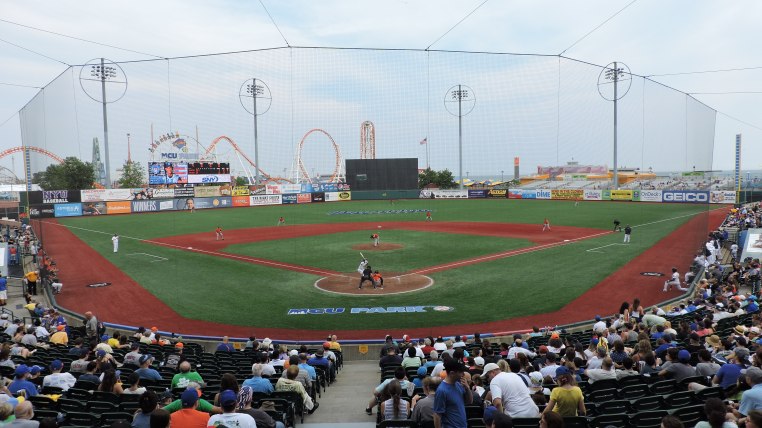 .
Within this whole area is the terrific MCU Park, home of the single-A Cyclones and I don’t think there could be a better location for a minor-league baseball park. The place indeed remains a top ballpark and it starts with the way Brooklyn treats baseball. Respectful displays include the Jackie Robinson/Pee-Wee Reese statue on the outside and the Wall of Remembrance on the side of the ballpark. Inside, the stadium fits it’s surroundings perfectly with neon lighting, a boardwalk to the outfield seats and concession stands looking like the ones just beyond on the beach. The ballpark design incorporates all of the great outfield background and while baseball may seem like a sideshow to everything else going on, the fans are more intuitive than many other places. There was bit of a dropoff in atmosphere and crowd size compared to the last game I saw here, but those aspects are still decent. As for the game, the Cyclones dropped this one to Aberdeen 9-3, their first home loss in their last seven games (my 2015 ugliness continues for home teams). My journey home began with a 50 minute subway ride on the F train back to Penn Station and then the long route on NJ Transit back to Denville, where I took advantage of the free overnight parking. While it may be a pain to get to MCU Park, all of the other awesome intangibles make it a destination ballpark.