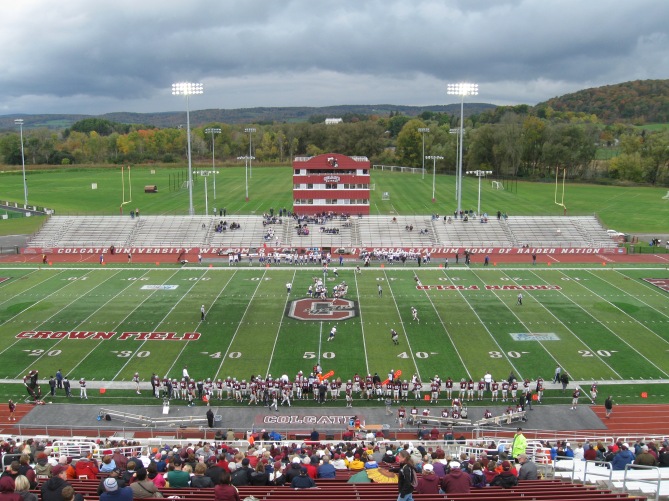 It was a rainy morning as I left Syracuse and it looked like all the rain gear I brought with me would be put to use for the Colgate game. It took about an hour to get to Hamilton and though the drive was awkward having to use country roads, it did allow me to pass through some pleasant little towns like Cazenovia and Morrisville. Hamilton was similar as this tiny village of just 4,000 sported a main intersection at the center with very little development on the outskirts. However, this primary meeting of roads represented a charming little downtown of brick buildings. The theatre and the college bookstore are most notable, while the white-painted Colgate Inn oozes history. Several places beckoned for an early bite to eat, but I chose the 22 Utica Street Cafe. Trip Advisor reviews of this are spot on as the cafe looks like it should be good…but my roast beef ‘special’ wasn’t all that and I’m not a fan of a place that does not put prices on their menu. $15 for a sandwich, homemade chips and a drink seemed a bit much. The owner also gave a lot of phony ‘sweeties and honey’s’. It is still an acceptable spot to eat, but my shortness on time led me to change plans for a quicker bite to eat here after originally planning on eating at the Inn. Another good place is the Good Nature Farm Brewery and Tap Room. After walking through the farmers market at the nearby park, it was time for some Raiders football.

The rain thankfully stopped and the soggy grass lot had a handful of both Holy Cross and Colgate tailgaters before the game. It was an odd entrance into the stadium as to get to the main stands, both the ticket stand and those checking tickets can be found right near the parking lot entrance. I had an odd encounter walking past the gate without even realizing and went through without even knowing I was in a ticket designated area. A little strange. Anyway, the main home stands arches upward with all bleachers and the visitors side contains a set of bleachers with a small press box on top. The best part of the experience is that beautiful surrounding view as the vibrant hills in the area are lit up with color in October. It certainly is a pleasant setting for football. The crowd was held back likely because of the weather and the laid-back game day setting applies to the crowd too. The game was refreshing as it is so great to watch football without incessant media timeouts. Colgate went old school as they used ground and pound to perfection in the second half. First, the Crusaders jumped out to a 17-7 lead and a key point of the game was Colgate cashing in with just :04 left in the second quarter as Alex Greenawalt hauled in a 14 yard pass to cut the deficit. A huge interception late in the third quarter led to a 14 play drive that QB Jake Melville finished off with a 1-yard run and the Raiders had the lead 20-17. With Holy Cross driving again deep into opposing territory, Peter Pujals made is second huge pick of the game to keep the Crusaders off the board. Then Colgate finished off the clock with a remarkable 15 play, 7:35 drive that ran the clock out for a victory. Every one of those plays was a run and the Raiders had 55 total rushes for 224 yards. A little bit of light rain and colder temperatures in the second half did not hamper the event and it was an enjoyable game in a nice football setting best seen in October. Look for a full review in a few days, along with a write-up over at Stadium Journey.