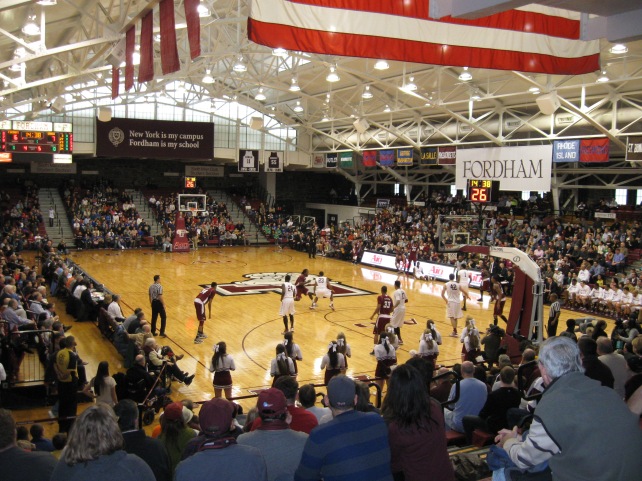 a
Fordham’s Rose Hill Gym falls just shy of making the 3,500 capacity requirement to be on The List, however the historical nature of the arena gives them a special exemption and on Sunday, I made the visit over to the Bronx. It’s never enjoyable to make a drive into NYC, but on this late Sunday Morning, the roads weren’t too clogged and it’s rather straight-forward to Fordham (the Cross Bronx to Webster Ave and then a couple quick turns to campus). After shelling out $11 to park in the garage (gasp!), I walked over to Arthur Ave, known as the Little Italy of the Bronx. Lunch was at Tino’s Delicatessen, a true Italian deli that made for quite a satisfying pre-game meal. Walking back to campus, I realized I had to go through a guard station and saw the sign “Please show your student ID”. My first thought was “crap” and then I explained to the guard that I was going to the game and parked on campus, grabbing some lunch before heading back. He was gracious enough to let me back in. I understand given the area (some side streets nearby are quite shady) why campus is blocked off, but I wish that was a little more obvious to visitors. Be aware if you make the trip someday, Fordham parking is just for Fordham.

I had enough time to wonder the university before the 1 PM tip and it is a really nice campus. Old stone, gothic buildings make up most of the central part and you could sense the history in this Jesuit school. The gym is designed much in the same manner that the other campus buildings are and the 1926 design remains wonderfully untouched on the outside. Entrance to the gym is through the McGinley Center, a multi-purpose building serving many needs. After some initial issues trying to get my will-call ticket, I walked through the tiny hallway corridors into the gym. The history shines on the outside, while inside, though you can see the old nature of the arena, it is not as charming as other older basketball buildings. Each side has a small set of seating, most of it being red, plastic bleachers. Where the age shows is at the top of the sidelines, where an old balcony holds two rows of seats on a wooden platform. These are terrible seats because on one side, TV cameras get in the way of many, while the other side has a huge Fordham banner hanging down from the ceiling that restricts the view. Another curious thing was the placement of bathrooms. They are outside of the arena as one has to exit the gym back to the McGinley Center. That’s fine, but maybe don’t put signs inside the gym that say “Additional bathrooms upstairs and downstairs”. I asked three guards where those bathrooms might be and was pointed in the wrong direction each time. Yikes.

Where Rose Hill pleasantly surprised me was the atmosphere. Given Fordham’s perennial crapiness and their current 5-11 record, I wasn’t expected much from the crowd. But the 2,000 or so there were fully into it and I should’ve known better from New Yorkers. After getting back home, I watched a little of the YES re-broadcast and the noise does not come out on TV. In the second half, tiny Rose Hill was very loud, enough where I muttered to myself a few times “this is pretty good”. This was without the students (who were returning on campus for classes tomorrow) and the crowd got on their feet a few times as Fordham made a push late in the game. As for that game, it was against A-10 foe, Massachusetts (who brought a decent set of fans of their own). Getting sidetracked for a second, Fordham does not belong in the A-10. Since 1995, they have had one winning record and just a few years ago had an astounding 41 game conference losing streak. I know the prestigious university is well off in terms of money, so how about going to a more even level of competition (along with a better geographic fit). I think the Rams really belong in conferences that they previously were in…either the Patriot or MAAC. Anyway, back to the game…Massachusetts’ interior defense had its way with Fordham in the first half as the Rams seemed to miss every contested shot in the paint. With Chaz Williams carving it up on the offensive end, UMass took a 40-26 lead at the break. In the 2nd half, it was a different story as Fordham played with more intensity and started to get shots to fall (they shot 27% in the first half, 47% in the second). Chris Gaston also took over as he had 18 of his 20 points and Fordham chipped the lead to two in the final minutes. They just couldn’t make that final push and UMass made their free throws as they held on to win 77-73. A frustrated crowd at the end saw the Rams fall to 5-12 on the year. Overall, I walked out of Rose Hill Gym intrigued with a visit that had some surprises. Look for a more detailed review to the right later in the week…until then take care!