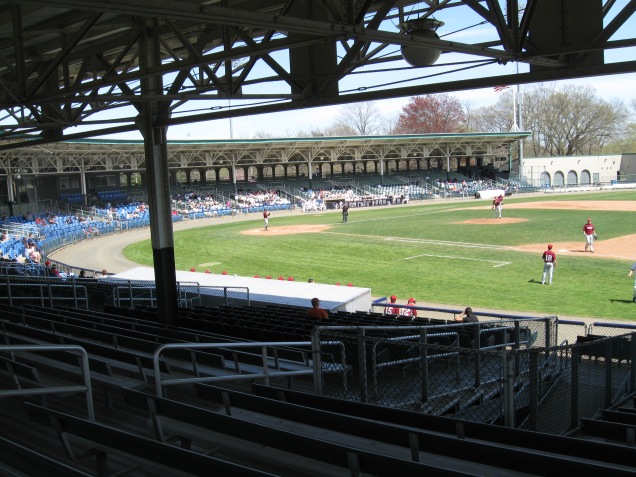 Yesterday was a beautiful day here in the Northeast and I normally like to space out stadium trips a little bit, but with the next two weeks busy on my end, I found Yale Field to be a perfect fit for stadium visit #118. Yale is located in New Haven, CT and I’ve never been to either place. There are three other venues on The List in the area and with two of those likely to draw a lot more people (Yale Football and a WTA Tennis event), this seemed like the best time to take a tour of Yale’s campus. We started by going to the Peabody Museum of Natural History in the morning, which is steeped in history as one would expect. Some interesting pieces on dinosaurs here and it was a pretty good way to spend a few hours.

Then it was off to historic Yale Field for a Bulldogs baseball game. The ballpark is not close to the busy downtown and campus area, instead a couple miles away in West Haven. This was a rare occurrence where there was no parking. People were using grassy areas behind the ballpark and there were only a few spots left when we arrived. This is OK when a few hundred show up to each game, but how in the world did they host a Double A Eastern League team in the mid 90s!?! The whole experience continued getting weirder when we were walking up and I thought I heard the PA announcer announce the next hitter. It was 12:55 PM and the scheduled start time was 1 PM, yet we walked in and there were already two outs in the top half of the first inning. Who starts a game early?? Once inside, out of the few hundred fans there, handfuls were shirt-less. So, I guess a 65 degree mostly sunny day is quite toasty for New Haven? Just a very weird stadium experience, but overall it was one I enjoyed thanks to the preserved nature of the old ballpark built in the 20s. Though it wasn’t my favorite (not a fan of the shallow pitch to the seating bowl), there were several neat touches, like the old chairs left in the back row. As for the game, the Ivy League plays doubleheaders, so this was Game 1 against Harvard. Yale came in to the game at 0-8 in the conference and this was a terrific game that I was glad had a little Rowland magic for the home squad at the end. After Harvard took the lead 2-1 in the top half of the last inning (7th), the Bulldogs rallied to tie the game at 2. Then in the 8th inning, Joe Lubanski ripped a triple and then was sacrificed in to give Yale the win as they broke a 12 game losing streak. I wish I caught a video of the jubilation afterwards, because the celebration was great to watch. These kids aren’t playing for much more than pride and the emotion of them just winning a ballgame was something special. Congrats to the Bulldogs and kudos to the few clusters of fans who were standing and making noise at the tail end of the game. Check out the review here and I’ll also be writing up a review for Stadium Journey

After the quick 2 hour game, we drove back downtown and went to the Yale Visitors Center. We were going to tour the campus on our own, but take a look at the campus map. It is crazy big and confusing as the campus is intertwined with downtown New Haven, making for an interesting dynamic. So instead, we went with a self-guided tour where you bring a map and download the audio tour onto an MP3 player. This is the first time I’ve done this and it gets a little annoying going back and forth to the Ipod, but it worked and gave us a full tour of Yale. There are tons of gothic, old buildings here, each one with it’s own story. One of those that I went to was Payne Whitney Gymnasium, which also houses the John J. Lee Amphitheater, home of Yale basketball. Though this place might not be on The List because of the small capacity (2,800), it looks like a really cool place to watch game. The entrance feels more like a library or a museum and then the gym (much like Yale Field) retains it old characteristics, especially with the wooden seats. After walking what felt like 5 miles, we finished the day at Modern Apizza for a taste of true New Haven pizza. Surprisingly, I became a fan of this pizza type and my mouth is watering just looking at that picture below! 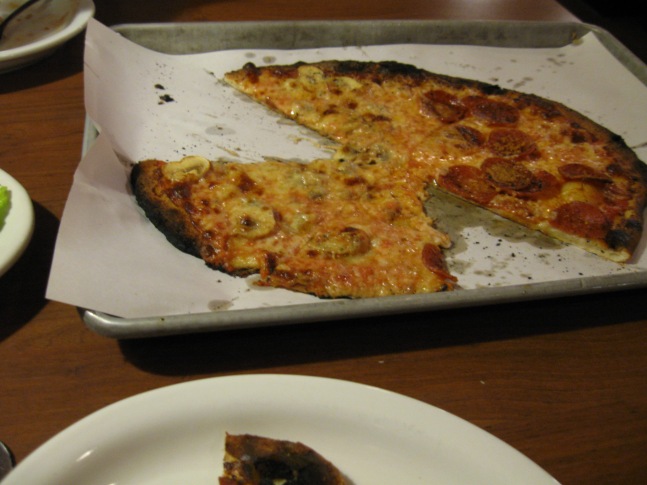