We took off from Newark, NJ on Thursday Night and after taxiing on the runway for 45 minutes, we only managed to arrive in Austin 15 minutes late. Most of Friday was just spent lounging around, catching up and hanging out with friends. Our hotel was in the area known as Hill Country, just west of the city near the Lake Travis area, where the wedding was in the evening which was quite picturesque on a perfect Spring evening. The wedding was great, lots of fun and good old times.

It was onto sight-see in Austin on Saturday and the reputation it as of being an awesome and cool city is dead on! What a great place as it just has such a nice vibe to it, with the countless great places to eat and hang out.  Everyone seemed cool  and the area as a whole just looked good. So many cities dub themselves as “Big city with small-town charm”, but Austin is the only place I’ve truly seen that so far. The city is known as the “Live Music Capitol of the World” because of the great music scene and tons of concerts both big and small.

We started by heading to Mount Bonnell which at 780 feet gave us a nice overlook of the city and Lake Austin (Colorado River) below, which is dotted with huge houses and McMansions. Then it was on to the University of Texas to roam the campus, where I spent a lot of time wandering around Darrell K. Royal-Texas Memorial Stadium and peering inside the gates. It looks like a decent stadium with what little I could see inside and the outside architecture wasn’t bad either. I could only imagine the sounds and colors on game day in and around that place and I now really have the itch to get there for a game. I also spent some time walking around the Mike Myers Track and Soccer Stadium which seats 20,000. The rest of the campus was huge and scenic. A couple nice fountains and statues, along with the landmark UT Tower, which we just missed a tour of. In the evening, we went to the Congress Street Bridge to see the famous Austin Bats. There are over a million bats that live underneath this bridge and around dusk they all come flying out. It was tough to see them because of the disappearing light and it amazed me how all of them flew into the same general direction and area. Pretty cool seeing how long this went on and realizing there were over a million of them. Afterwards, we went into town to grab some Tex-Mex at Trudy’s where the enchiladas were awesome. The rest of the night was spent around crazy 6th Street as they close the road off  and the nightlife begins with a million bars, restaurants, clubs and live music joints to choose from.

Sandwiched in between that was a University of Texas baseball game at UFCU Disch-Falk Field. The Longhorns are one of the winningest programs in college baseball and have the most College World Series appearances and wins. At the time of the game they led the Big 12 standings and were ranked #4 in the country. This was my first ever venture into a college baseball stadium and it was cool to start off with a top one. From the few older photos I’ve seen, they did a remarkable renovation here a few years ago that completely transformed the facility for the better, yet didn’t lose much in the way of historic and older, better features. The outside design looks good. Now I’m all for landscaping on the outside, but why did they stick a tree right in the way of the entrance view! Inside, has a solid set-up with the main bowl being retrofitted, yet still looking good. Loved the overhanging roof and being in the shade on a rather warm, sunny afternoon. I wasn’t sure what the college baseball atmosphere was going to be like and this met and exceeded expectations. We had a great crowd, though I was surprised at the lack of Texas students as almost everyone was on the older side. They made noise and hearing the Texas Fight Song along with “The Eyes of Texas” had me displaying the Hook’em Horns sign. Texas took the game 3-1 with Cole Green pitching a gem and moving to 7-0 on the season. The pace moved well (only 2:19) and the Longhorns came back in the middle innings, with a Tant Sheppard home run giving them the lead and eventually the win.  Click here for the full review.

Sunday found us heading South on I-35…passing by San Marcos, home to Texas State. With football and basketball done, no games to be found there, so it was on to beautiful San Antonio. Before getting into the city, we checked out the Natural Bridge Caverns just North, which was a tour of some pretty sweet caves. Except for Vegas, San Antonio has the best downtown area that I have seen so far with the RiverWalk meandering underneath street level.  The RiverWalk is a man-made diversion from the San Antonio River and is like a canal. Restaurants and shops line the area along with other several other attractions. We spent a lot of the day here, which included seeing the Alamo. People say it’s smaller than you think and I was prepared for that…but let me tell you, it really is smaller than you think! I also believe I am moderately intelligent and for some reason, I just had a hard time following the history of the Alamo once you go beyond the basic storyline. Anyway, the boat ride on the RiverWalk is well worth it and should be your first stop so you can take it all in and then enjoy it at a leisurely pace. At night, we met up with some friends who also did the Austin-San Antonio thing and hung out a dueling Piano bar called “Howl at the Moon“…lots of fun!

Monday was spent in Brackenridge Park to check out the San Antonio Zoo and a little bit of relaxing at the Japanese Tea Gardens. Then back downtown to HemisFair Park and a very brief trip up the Tower of the Americas, which I wish I had a lot more time for, but had to settle for a quick 15 minute circle at the top to take in the view. The view did allow me to take in an aerial shot of the Alamodome. I always liked the appearance of this dome on TV and seemed like an aestheically pleasing venue. I wonder why there are four “points” on the corners. The reason for the quick stay was that we needed to jet out of there to get the 82nd visit on my list…AT&T Center. This was the only game in town during our visit as the only other possibility in April would have been Nelson Wolff Municipal Stadium, but the Missions were on a road trip (also, I just missed a rare sporting event at the tenant-less Alamodome as the NCAA Women’s Final Four was there the week before).

This was the Spurs last home game of the season and they were jockeying for playoff position in the West, while Minnesota (15-65) played the minnow ready to get eaten. They kept close for about 10 minutes, then San Antonio ramped it up and were up by 22 at the half. They were at 100 shortly into the 4th quarter and won 133-111 with some well rounded scoring as eight guys reached double figures and nobody exceeded 20. This was visit was my first new venue featuring the NBA and 2nd total NBA game. I’m not a fan of the Association as I greatly prefer everything about the college game and could talk your ear off about it. In fact, the NBA may be the only sport/league that I’m clueless about it. If I go see a new venue that hosts both NHL/NBA, I’ll take the NHL. 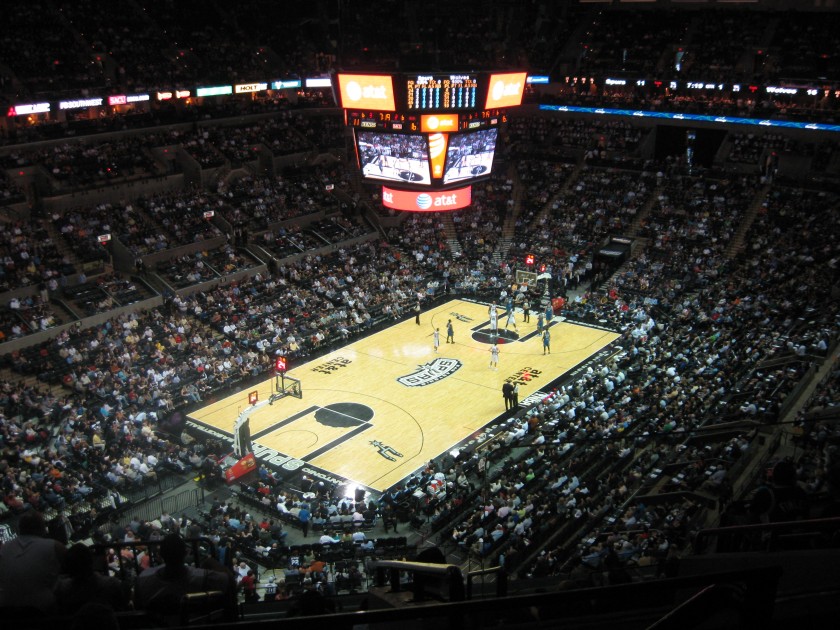 Anyway, the AT&T Center is a very fine facility. For a complete review, click the link to the right. The aspect that stuck out the most for me was the wonderful concourse. It’s decorated with bright colors and San Antonio flair, really giving the vibe of the city. There are overhanging “Christmas-like” lights giving that feel Riverwalk has during holidays and celebrations. Art fills the walls and there are other great features. Food was excellent with a ton of variety and your fair share of Tex-Mex and Barbecue. The inside seating design in the shape of an octagon all centered on the court gives the feel of this being a true basketball arena. There’s too much to re-write here, so make sure to view all details of our trip to the AT&T Center. The Spurs win finally got me back on a little winning streak (2) for the home team and I also broke another little streak: Even though, I despise the ridiculous craziness the “T-Shirt Toss” causes, the wife loves it. And in the waning moments of a blowout, a wrapped-up t-shirt shot into the Upper Deck and caromed into my hands, breaking an 0 for 43 streak. The Spurs are now her favorite team.

So that wraps up a great trip to Texas. Caught up and hung out with some old friends, saw the sights of a beautiful area and got in two new facilities, both of which were really nice. I’ll be coming up with Summer stadium plans pretty soon. I definitely have to get to one of the two New York ballparks (likely Citi Field) and I’ll likely try to put together a multi-stadium trip at some point.